All the Time We Thought We Had

All the Time We Thought We Had

A story of love and loss and a meditation on grief and memory.

How do you start a new life when the person you love is about to die?

At the age of thirty-six, Gordon Darroch’s wife was diagnosed with breast cancer. It was a devastating blow just as he, and their two children with autism, were preparing to move to her native Holland. Eighteen months later, as their plans seemed to be back on course, came the second blow: Magteld was terminally ill and possibly had only a few months to live. As her health rapidly deteriorated, they became caught up in a race against time to get a dying mother home and give their children a future in a country they hardly knew. How could they build a new life in the midst of grief and loss? How would their two sons adjust to such enormous changes? And what would remain of Magteld once she was gone?

All the Time We Thought We Had is a story of love and loss and a meditation on grief and memory. It’s about how events shape our lives and how we cope with them. And it raises important questions about what we value in life and the legacies we leave behind.

Gordon Darroch was born in Norwich in 1974. After studying English Literature and German at the University of Edinburgh, where he also edited the student newspaper, he went into journalism as a reporter on the Peterborough Evening Telegraph. In 2001 he moved to Glasgow, where he worked for the Press Association, the Herald and STV News. In 2014 he emigrated to The Hague with his wife Magteld Darroch- Jansen, who died seven weeks later from breast cancer. The couple met in Italy in 1992, married in 2001 and had two children. 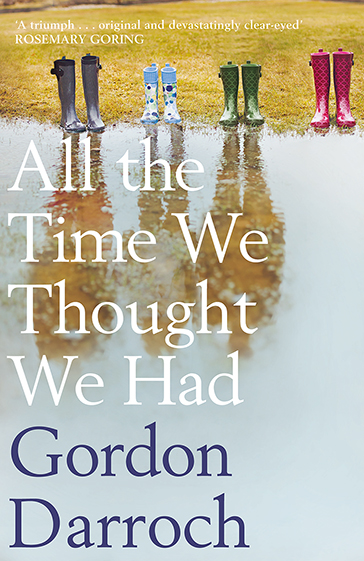