The Making of a Masterpiece

Anstruther: A History is written by a local author with a deep understanding of Anstruther, who conveys her enthusiasm for her subject in elegant prose and well-chosen pictures.

Anstruther is one of the most picturesque villages on the north coast of the Forth, packed with architectural delights and filled with historical resonance. Trade with the Low Countries began as early as the late fourteenth century; during the eighteenth century it was home to a chapter of the dubious gentleman’s club The Beggar’s Benison and during the nineteenth and early part of the twentieth it enjoyed its heyday as one of the main centres of the Scottish herring industry. Today it houses the world-renowned Scottish Fisheries Museum.

Anstruther was in fact, until recently, two distinct communities. The small settlements of Anstruther Easter and Wester grew up on either side of a burn. In spite of their nearness they grew in different ways. Both were granted charters in the 1580s and became self-governing communities, which they remained for the next 340 years.

This book traces the history of both burghs from earliest times to the present day. Through meticulous research which includes reference to the records and minutes of the two town councils, to local newspapers and even the deeds of old houses, it provides a fascinating insight into the histories of the two burghs and portrays the lives and personalities of some of the past inhabitants. These include Anstruther’s native poet, William Tennant (1784­1848), professor of Oriental Languages at St Andrews University and author of the well-known Anster Fair (1812), and Princess Marama of Tahiti, Chiefess of Haapati, who lived with her Scottish husband in Johnston Lodge, Backdykes. 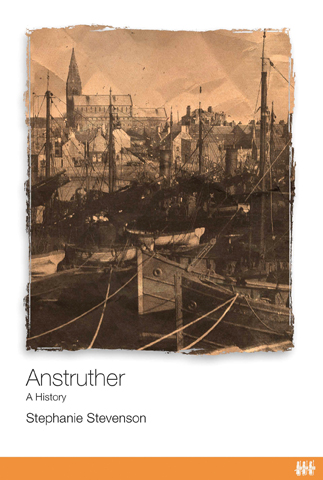