The first ever book of recipes devoted to one of Scotland’s most famous foods.

The Arbroath Smokie is one of Scotland’s best loved traditional fish delicacies, taking its name from the small coastal town in the county of Angus it has been on the menu for a thousand years. Unlike its famous fishy relatives, Finnan Haddies and Loch Fyne kippers, which are cold-smoked and require cooking before heating, Arbroath Smokies are uniquely hot-smoked, making them ready to eat straight from the smoker.

In this book, Iain R. Spink, whose family have been involved in this traditional way of cooking haddock for five generations, introduces the history of the Smokie and divulges the process involved in its preparation. He also explores its enormous versatility in 30 mouth-watering recipes for all occasions, from Arbroath Smokie and Leek Chowder, and Luxury Fish Pie to Tagliatelle with Creamy Lemon Smokie, and Arbroath Smokie and Spinach Gratin.

Iain R. Spink works tirelessly to elevate the humble Arbroath Smokie from a local speciality to nationwide delicacy. His dedication, passion and enthusiasm for the product has led to many prestigious national awards, including being crowned 2006 BBC Food Producer of the Year. He has been featured in numerous newspaper, magazine and book articles and many TV appearances, giving him the opportunity to demonstrate the ancient process and relate its fascinating history to a huge audience. He continues to promote Arbroath Smokies throughout the year at farmers’ markets and various events throughout the country. 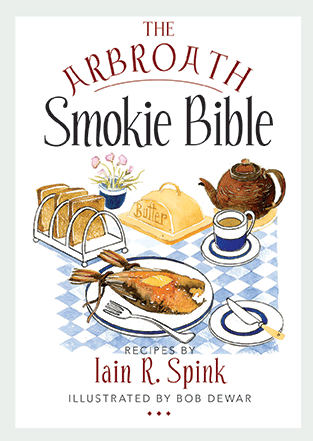