‘Extraordinary. Far more than another wartime love affair. I closed the book with the strong feeling of the importance of kin shire, the need to nurture one another, and the power of love. It will enter your soul’ – The Scots Magazine

‘a tragic tale, captivating and a good read’ – Press and Journal, Book of the Week
‘Striking, charming, page-turning novel about love in the ruins of the first world war’ – Piping Times
‘Burns with love for his country…[Macdonald’s] plain, easy-going style takes on a natural engaging momentum’ – The National
‘a genuine portrait of a time gone forever … a very good read’ – Rosamunde Pilcher

'This is a book that is truly enthralling – brutal, poetic, unjust but beautiful… A beautiful yet tragic tale, set in the First World War, Ardnish Was Home kept me captivated throughout and left wanting more at the end. It delivers everything the title implies about family and community in the Scottish Highlands and illustrates that love can be found in the most desperate of circumstances' – The Bookbag

Young Donald Peter Gillies, a Lovat scout soldier lies in hospital in Gallipoli in 1916, blinded by the Turks. There he falls in love with his Queen Alexandra Corps nurse, Louise, and she with him.
The story moves back and forth from their time at the field hospital to the west highlands of Scotland where Donald grew up. As they talk in the quiet hours he tells her the stories of the coast and glens, how his family lived and the fascinating life of a century ago: bagpiping, sheep shearing, celidhs, illegal distilling, his mother saving the life of the people of St Kilda, the navvies building the west highland railway and the relationship between the lairds and the people. Louise in turn tells her own story of growing up in the Welsh valley: coal mining, a harsh and unforgiving upbringing.
They get cut off from the allied troops and with another nurse are forced to make their escape through Turkey to Greece, getting rescued by a Coptic priest and ending up in Malta. By this time their love is out in the open, but there is still another tragic twist to their story waiting on the way back to Donald’s beloved highland home . . .

Angus MacDonald has lived all his life in the highlands and is steeped in their tales. He served in his local regiment, the Queen’s Own Highlanders. A serial entrepreneur he was awarded the Spear’s UK entrepreneur of the year award for 2017, building businesses in publishing, renewable energy, recycling and education. He founded The Caledonian Challenge and runs The Moidart Trust, as well as being co-owner of The Highland Bookshop in Fort William.

Goodreads reviews for Ardnish Was Home 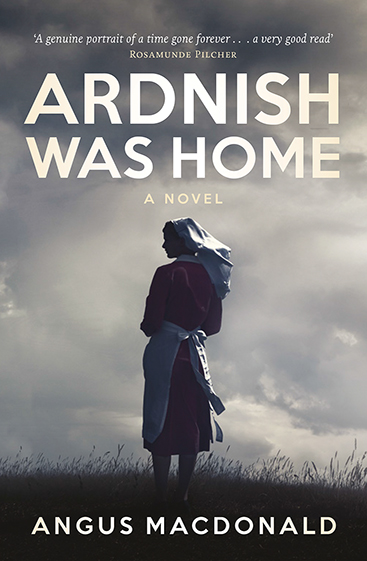 Format: Available as an eBook only