Auld Enemies: The Scots and The English

Auld Enemies: The Scots and The English

This book provides a unique record of the long contest of verbal warfare across the Border, from its beginnings right up to the present day. Auld Enemies will be a useful handbook that can be enjoyed whichever side you’re on.

For almost a thousand years, Scotland and England have been neighbour nations. For more than half that time, they were foreign countries to each other, often at war. Three hundred years ago, they joined in a United Kingdom and the new concept of ‘Britishness’ arose. But this covered over, rather than combined, the long-established identities. For most purposes Scots remained Scots and English remained English, and the old sense of rivalry did not go away. It still remains.

In olden times, a war of words and propaganda accompanied the fighting. As the countries got to know each other better, and the fighting died down, the verbal exchanges continued, and became sharper, more wide-ranging, and funnier. More than a collection of jokes, insults and critical observations, however, Auld Enemies shows how humour in its own way can join as well as divide, providing a code or language in which differences can safely be measured and expressed.

Ethnic humour, expressing a relationship between nations or national groups, is usually a one-sided business, with the humour created by the ‘superior’ group at the expense of the ‘inferior’ one. The Scottish-English humorous war is of particular interest because both sides considered themselves to be the ‘superior’ group. Auld Enemies will be a useful handbook that can be enjoyed whichever side you are on.

‘How’s your brother Donald?’ asked one Scot of another.
‘Oh, he’s never been the same since his accident,’ was the answer.’ They had to remove a third of his brain, you know.’
‘Oh, dear. So what’s he doing?’
‘We sent him to England. He’s doing fine there.’
‘Oh yes, which hospital?’
‘Who said anything about a hospital?’

Mr Macpherson, being always careful with money, was rather upset when he accidentally dropped a fifty-pence piece into the public toilet. ‘Is it worth it?’ he thought dubiously. Then he had a brainwave. Reaching into his pocket, he brought out another 50p piece and dropped it in. ‘A pound’s another matter entirely’, he murmured, rolling up his sleeve. 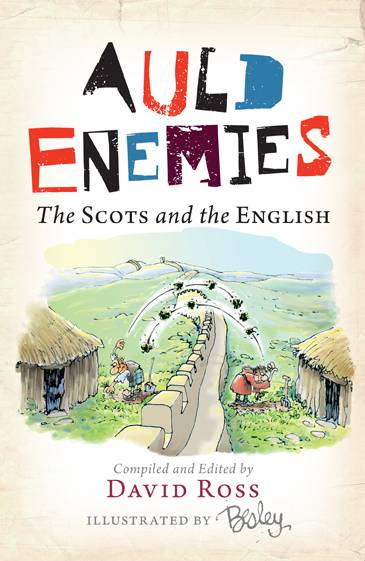