10 in stock (can be backordered)

When the Bartholomew Survey Atlas of Scotland, 1912 atlas was originally published, it received rapturous reviews. Dr Walter Scott Dalgleish wrote in the Scottish Geographical Magazine; It is a boon to Scotsmen to have placed within their reach such a splendid delineation of their country in its varied physical aspects – a delineation so comprehensive in conception, so elaborate in its details, and so accurate in every respect. It is not less a credit to Scotland that both in conception and in execution the Atlas is the work of Scotsmen. Scottish enterprise projected it, and Scottish ingenuity, skill and taste have carried it through all its stages from first to last. The Scotsman compared the Survey Atlas to the Blaeu Atlas (the first in our limited edition series) concluding that ‘Blaeu is to Bartholomew what the grub is to the butterfly’. The magnificent Survey Atlas of Scotland is important for many reasons:

• It was the first folio atlas of Scotland to be conceived, designed, printed and published, not only entirely within Scotland, but also under one roof – the Edinburgh Geographical Institute of John Bartholomew & Co. Ltd.

• It was the first folio atlas of Scotland to be printed by colour lithography, employing this relatively new printing technology to produce an array of uniquely distinctive coloured maps.

• It was the first major atlas of Scotland to be commercially successful.

• It was also a scientific milestone, as the first atlas of Scotland to bring together national and international experts in the physical and natural sciences, who wrote text and drafted thematic maps for it.

• It is the first modern atlas ever produced. In this limited edition we reproduce the 1912 edition. It contains introductory texts on Scotland’s history, geology, climate and population, a history of Scottish cartography, thematic maps of Scotland (including a ‘Motoring Road Map’), 45 large topographical maps covering the whole of Scotland, and town plans of the major cities. In addition we have included the thematic mapping (mammals, birds, reptiles, deer forests, and languages of Scotland) that appeared in the 1895 edition but not in the 1912 edition, so that all the maps produced for this great atlas can be seen in one place.

To accompany the Atlas, there are two introductory essays.

Chris Fleet, Senior Map Curator at the National Library of Scotland writes on ‘The making of the Survey Atlas’.

Karla Baker, the Bartholomew Archive Curator at the National Library of Scotland, provides a biography of the atlas’s creator, J. G. Bartholomew. 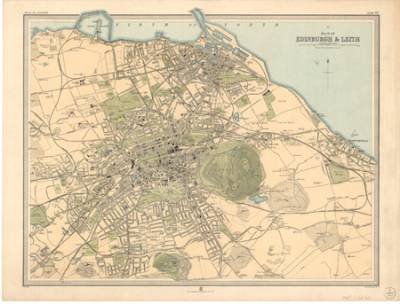