66 in stock (can be backordered)

'I felt on edge throughout and found it pleasingly original within its genre. Loved the Edinburgh link and the familiarity that brought’ – Charlie Bush, Manager, Blackwells RBOS Gogarburn

Taking a job in the studio of an Edinburgh taxidermist probably isn’t Walt’s wisest decision. Suffering from combat stress and struggling to outrun the demons from his past, he now finds himself confronted by the undead on a daily basis.

His enigmatic boss, Alys, and her sister, Mouse, have their own uneasy relationship with the past. Someone doesn’t want to let them go. Can Walt save Mouse’s eight-year-old son, William, from becoming the next victim? And can he save himself?

Deliciously disturbing, this psychological thriller peels back the skin of one modern family to reveal the wounds no one wants to see. It deals with the effects of trauma and how facing up to vulnerability is sometimes the only way to let go of the past.

Sandra Ireland was born in Yorkshire, lived for many years in Limerick, and is now based in Carnoustie. In 2013 Sandra was awarded a Carnegie- Cameron scholarship to study for an MLitt in Writing Practice and Study at the University of Dundee, graduating with a distinction in 2014. Her work has appeared in various publications and women’s magazines. She is currently writing her second novel, another psychological thriller.

Goodreads reviews for Beneath the Skin 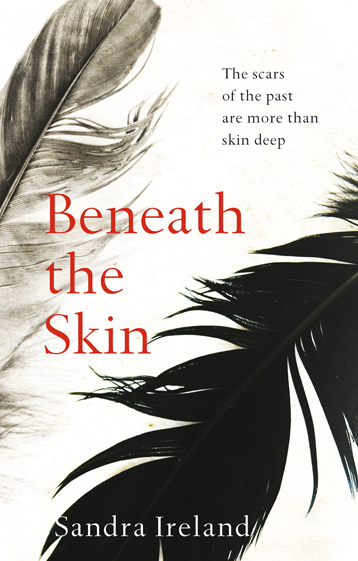