A Polygon newcomer, Sam Meekings presents thoughtful, light and earthy poetry. Each poem a fleeting moment that demands a long pause of reflection and moves off once again leaving a pensive smile.

4 in stock (can be backordered)

‘The textbook tells us that the frog lives
a double life: between sea and land, between
impossible distance and delayed arrival.

See, those jumpy chubby reels of twitching slime,
and this little pip below the chin; the first voice
the universe heard, halved and inside-out.’

‘Shuttles between the natural, the philosophical, and the manufactured world, never missing a beat…my expectations are high for the future of Sam Meekings,’ – Stephen Lackaye, Edinburgh Review

The Bestiary is an astonishing debut collection of lyrical, intelligent poems which challenge the ways in which we respond to the natural environment around us. With subjects that range from sea-bound eels, lost hedgehogs and lonely butchers to a 17th-century autopsy, Chinese mythology and the flight patterns of snow geese, Sam Meekings’ poems explore both the instability and the small moments of epiphany in our complex and changing world.

Sam Meekings grew up near the south coast of England. He took an undergraduate degree in Modern History and English Literature at Mansfield College, Oxford University and, later, a Masters degree in Creative Writing at the University of Edinburgh. Since 2005, he has lived and travelled in various parts of China working as a teacher and editor. In 2006 and 2007 he was longlisted for an Eric Gregory Award for poets under 30. 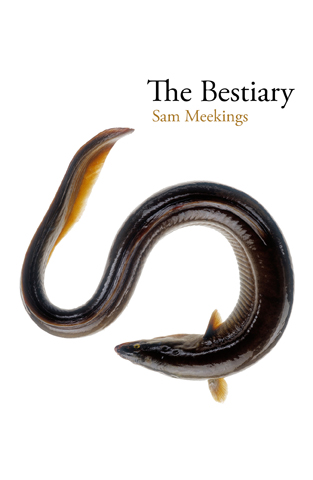