A celebration of the life of Bobby Tulloch.

‘Filled with photographs and hair-raising anecdotes of Tucker’s conservation work on the rugged Shetland Islands, it’s a lovely celebration of his life and work’ – Book of the Week, Press and Journal

Bobby Tulloch, known to his pals as ‘Tucker’, was the son of a crofter in the island of Yell. He’d started his working life as a baker and became, through his own extraordinary talents and a certain amount of good luck, a renowned field ornithologist, tour guide, author and wildlife photographer. He was also an accomplished musician and songwriter, a skilled fisherman and a daring (some would say reckless) navigator of small boats among big rocks. He toured the UK giving illustrated talks for the RSPB and frequently appeared on national TV and radio. But perhaps his greatest skill was for friendship. When he died in 1996 at the age of 67 he was mourned by hundreds of friends throughout his native islands and far beyond.

In this book, some of those friends celebrate their many happy memories of his life. After a biographical sketch by Jonathan Wills the stories from other contributors tumble out – dramatic, insightful and usually very funny. The book is illustrated throughout with evocative pictures from those eventful days and Bobby’s wonderful wildlife and landscape photographs.

Jonathan Wills is a Shetland councillor who describes himself as ‘a recovering journalist’. He got to know Bobby while working as a student reporter on The Shetland Times and later worked closely with him in the early years of BBC Radio Shetland. Later still, Bobby was the inspiration for Jonathan’s successful wildlife tour business, Seabirds-and-Seals.

Mike McDonnell was the Mid Yell and Fetlar doctor for 25 years, during which time Bobby was one of the boatmen who ferried him between the two islands. Betty Tulloch was the district nurse and the couple were friends and neighbours of Mike and his family. Mike inspired and helped to found the Old Haa heritage centre in Burravoe, which now houses Bobby’s photographic archives. 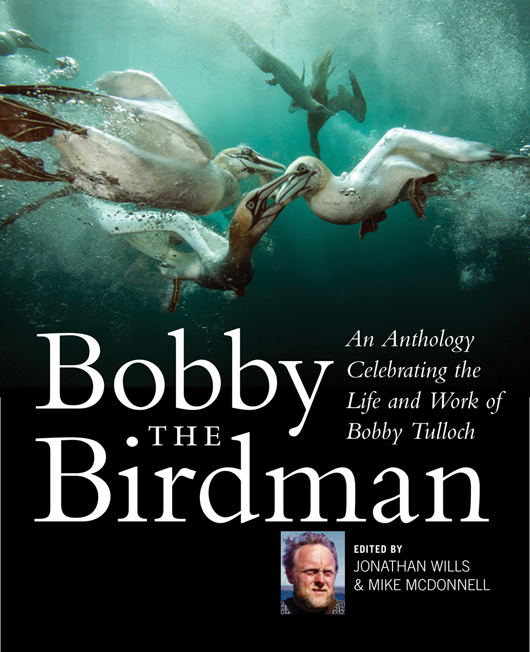