The Truth about the Sinking of HMS Royal Oak

'a thoroughly enjoyable page turner which starts peacefully like a millpond, but one which imperceptibly gathers pace as it races towards a conclusion that resists the draw towards either sentimentality or the macabre' – DURA

'I feel as though I was fated to read Bone Deep, that our paths were meant to cross, it is a chilling, yet absolute treasure of a book – highly recommended' – Liz Robinson, Lovereading.co.uk

'a beautifully written and thoughtful constructed psychological study … Bone Deep is only Ireland’s second novel, but it’s a tremendous example of writing and plotting, and I await her next work eagerly' – Scotland on Sunday

'Gripping from the outset, an atmospheric, fluent book which keep me reading into the small hours' – Dundee Courier

What happens when you fall in love with the wrong person?

The consequences threaten to be far-reaching and potentially deadly. Bone Deep is a contemporary novel of sibling rivalry, love, betrayal and murder. This is the story of two women: Mac, who is bent on keeping the secrets of the past from her only son, and the enigmatic Lucie, whose past is something of a closed book. Their story is underpinned by the creaking presence of an abandoned water mill, and haunted by the local legend of two long-dead sisters, themselves rivals in love, and ready to point an accusing finger from the pages of history.

Sandra Ireland was born in Yorkshire, lived for many years in Limerick, and is now based in Edinburgh. She began her writing career as a correspondent on a local newspaper but quickly realised that fiction is much more intriguing than fact. In 2013 Sandra was awarded a Carnegie-Cameron scholarship to study for an MLitt in Writing Practice and Study at the University of Dundee, graduating with a distinction in 2014. Her work has appeared in various publications and women’s magazines. Her debut novel was Beneath the Skin (Polygon, 2016). 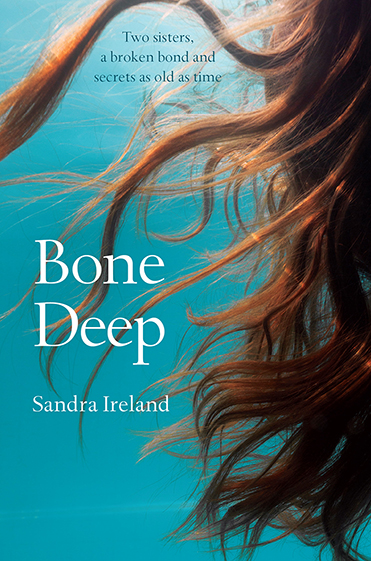