The Book of Iona

The Book of Iona

68 in stock (can be backordered)

‘Enthusiasts of Iona will appreciate the rich woven through the pages, whilst those who have never visited will be captivated and spirited away to a special land’ – Life and Work

The Book of Iona shows how novelists, poets, saints and sinners over the centuries have written about one of the world’s most famous and best loved islands. Including many new, specially commissioned Iona stories and poems from writers including Meg Bateman, Jennie Erdal, Meaghan Delahunt, Candia McWilliam, Ruth Thomas and Alice Thompson, this anthology also contains a treasure trove of earlier material – from poems attributed to St Columba in modern translations by Edwin Morgan and Robert Crawford to amusing accounts of their visits to the island by Samuel Johnson, James Boswell, and John Keats.

In The Book of Iona, as on Iona itself, the sacred and the secular rub shoulders. Here is where a medieval Gaelic-speaking monk encounters Seamus Heaney, and where Robert Louis Stevenson sails past Queen Victoria. Full of surprises, this is an anthology that will delight every lover of Iona and all lovers of literature.

Robert Crawford is Professor of Modern Scottish Literature in the School of English at the University of St Andrews. His seven collections of poems include Full Volume (Cape, 2008), Testament (Cape, 2014) and Apollos of the North (Birlinn, 2006), which featured his English translations alongside poems in Latin by George Buchanan and Arthur Johnston. Together with Mick Imlah he is co-editor of The New Penguin Book of Scottish Verse (2000), while his prose books include biographies of Robert Burns and T. S. Eliot. He lives in St Andrews with his wife and two children. 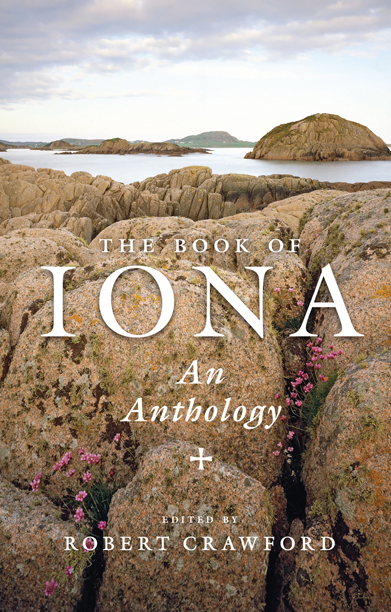