The Bureau of Second Chances

The Bureau of Second Chances

A gentle bittersweet novel about the twists and turns of love which will appeal to readers of all ages.

46 in stock (can be backordered)

‘A bittersweet, uplifting tone makes it impossible to put down … Kalayil writes beautifully, painting colourful portraits of her characters and managing her story’s unexpected twists with aplomb’ – Scotland on Sunday

‘There is plenty of light, with passages that will make you smile, but it has its share of darkness, touching on caste and social expectations in India, as well as reflections on marriage, illness and parenting … I raced through the last third of the book on the edge of my seat, desperate to know how it turned out’ – The Bookbag, FIVE STARS

Is going back the only way to start again?

After more than thirty years in London, recently-widowed Thomas Imbalil returns to India. He spends his first months in uncluttered isolation in his house overlooking the Arabian Sea, in a small fishing village in Kerala. But when he agrees to look after his friend’s business, Chacko’s Optical Store, he meets and befriends Rani, the young assistant. Before long he discovers that Rani is using the store to run an intriguing side-business. He agrees to turn a blind eye to her operations until his friend returns, but this discovery makes him restless, and reminds him of the loneliness he is feeling and which lies ahead of him.

Rani also reveals herself as a much more complex individual than he had first imagined, and while he had envisaged a quiet re-acquaintance with his homeland, Thomas finds himself becoming more and more entangled with the lives of those around him.

Sheena Kalayil was born in Zambia in 1970 where her parents were teachers seconded from Kerala, India. She arrived in the UK aged eighteen and, after graduating, worked all over the world. She has a doctorate in Linguistics and teaches at the University of Manchester. She lives near Manchester with her husband and two daughters.

A note from the author:
I grew up in a displaced Malayalee family: my parents are both from Kerala, India, but worked as teachers in Zambia and then Zimbabwe. They are both proficient in English; but, when they speak from the heart, they speak in Malayalam. Growing up, there were always these two languages in the home. Stepping out, there were several. As well as English, there was Nyanja, Bemba, Shona, Ndebele. Rather than having what is often described as a ‘bilingual and bicultural upbringing’, I grew up as participant and observer in a multilingual and multicultural world.
As an adult, I have lived in countries where I spoke French, Portuguese, or Spanish. I have been in inter-cultural relationships, where communication was conducted in two or even three languages. Multilingualism therefore, does not scare me but, conversely, makes me feel normal, and the way people communicate through different languages will always inform my writing. However, while I would be considered bilingual in Malayalam and English by most, I am also acutely aware that I am better capable of using the subjunctive and relative clauses in French and Portuguese than in my heritage language. And that, while I am a voracious reader and a writer in English, I have never learned to read or write in Malayalam.
I wanted to write a novel where someone who made the journey from the homeland into the diaspora, realises that he had a role as a parent: to bind himself and his child together with the heritage culture, rather than assume that by dint of a biological connection this link would survive. Further, that in making that journey, that person transforms into an emigrant, a minority, a parent who does not share his child’s experiences of growing up. In short, rather than writing a novel from my perspective (the child who has been displaced), I wanted to write a novel where the protagonist was the parent, who leaves India, and raises a child elsewhere. In The Bureau of Second Chances, Thomas feels more affinity with Rani than with his daughter Nina. Whereas he can bond with Rani over a novel in Malayalam, Chemmeen, that they both love, he cannot do this with Nina; a discovery that lends to his melancholy in his new life.
A crucial aspect of being a member of the diaspora is that your parents are the conduit to your heritage language and culture. How much you learn and engage with both, at least when you are growing up, depends on how much your parents invest in that learning, where they relocate you, the dynamics of their relationship and the parent-sibling dynamics of your birth family. While it may be assumed that second-generation/diaspora South Asians have had similar journeys, upbringings and bilingual/bicultural backgrounds, the reality is that, along with some shared commonalities, there is much diversity, difference and variation. Aside from wishing to explore the themes of love and second loves in writing this novel, then, I also found a way of making sense of my eccentric, rich, and erratic upbringing.
Sheena Kalayil

Goodreads reviews for The Bureau of Second Chances 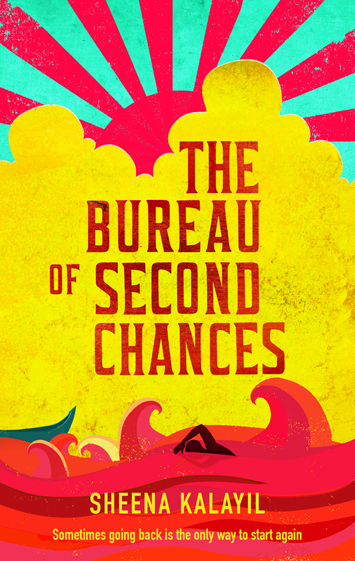