Following the Great Glen, the massive geological fault that runs diagonally right across Scotland, the Caledonian Canal is a photographers paradise. Rich in spectacular scenery, ruined castles and romanticism and traversing Loch Ness of Nessie fame, it is host to mainly tourist traffic today. This collection of photographs spanning a period from the late 19th century to the late 20th century tracks the fortunes of the canal through war time and peace with images of the fishing boats and paddle steamers which traversed it and its many locks. Such sights as the steamer Mountaineer at the sea-lock jetty below Ben Nevis, the flight of locks known as Neptunes Staircase at Banavie, Lockside entertainers such as Paddy of Laggan Locks and the short lived railway line from Spean Bridge to Fort Augustus make this a must have addition to the library of Highland lovers everywhere. 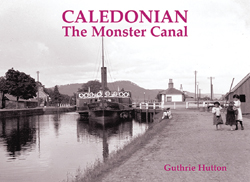