Campbells of the Ark, The: Volume 2

Campbells of the Ark, The: Volume 2

Second Volume of The Campbells of the Ark

Both Volumes will be published simultaneously.

In his long poem An Áirce, ‘The Ark’, the Jacobite poet Alexander MacDonald shows the Campbells being subjected to trial by water for the part they played in defeating Prince Charles’s army in 1745–6. Some will be drowned outright, he says, some just given a good ducking – and some will be honourably treated. He names thirty-nine individuals; Ronald Black puts their lives and deeds under the microscope to see how far they deserved their allotted fate. The result is a well-balanced portrait of the leading men of Argyll in the eighteenth century and a refreshingly new perspective on one of the most colourful episodes in Scottish history: the rising of the ’45 as seen through the eyes of Highlanders who helped to crush it. Each volume is separately indexed.

Volume 1 (‘The Inner Circle’) introduces the poet, the song and the Clan Campbell, followed by biographies of the thirty-one Campbells mentioned in the song, analysing the poet’s verdicts. The star of the show is the elder Mamore, the most underestimated of all the dukes of Argyll. Had he, not Cumberland, been commander-in-chief of Government forces in Scotland, a very different sort of accommodation would have been reached and, to use his own phrase, ‘poor Scotland had not bled’. The chapter on Colin Campbell of Glenure identifies his assassins.

Volume 2 (‘The Outer Circle’) presents the eight ‘Campbells of the Ark’ whose surname was not Campbell, followed by chapters pursuing the identity of Campbells mentioned in other Gaelic poems by MacDonald, especially a mysterious ‘Black Campbell’ who turns out to have been a zealous Catholic priest. The main emphasis is on a detailed study of the sixty-three local companies of the Argyllshire Militia of 1745–6, covering every corner of this fascinating county, from Kintyre to Ardnamurchan, from Islay to Glenorchy.

Ronald Black is a retired Senior Lecturer in Celtic Studies at the University of Edinburgh and former Gaelic Editor of the Scotsman. He is a book reviewer and broadcaster, and has contributed to a wide variety of newspapers and journals. He lives in Peebles, Scotland. 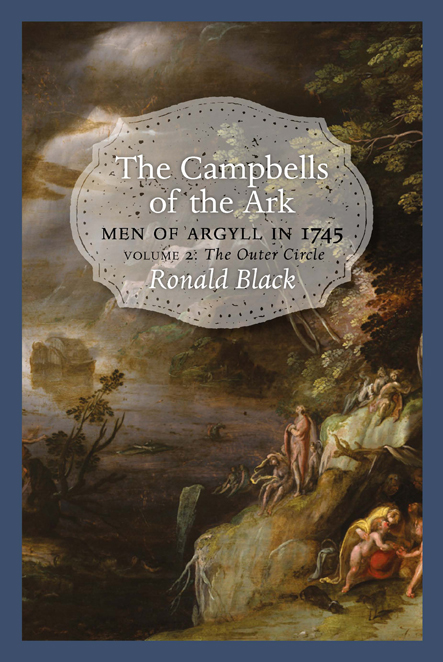