‘Her rumbustious energy rears up off the page, right into the ear, vivid, vernacular and joyous, as well as reflective and intensely moving,’ – Catherine Lockerbie, The Herald

A stunning new collection of selected works from one of Scotland’s most loved writers.

Liz Lochhead, former Makar (Scotland’s Poet Laureate, 2011–2016) is a writer and performer of immense warmth, wit and tenderness. She is a natural storyteller, and her instinctive feel for rhythm and voice constantly delight. In A Choosing, she presents a crafted, personal selection of poems published over the last four decades. Love and memory are the driving forces behind these poems, which range in theme from language to landscape, heartache to history, writing to womanhood. At times poignant, at others funny, always heartfelt and full of verve, A Choosing is a celebration of one of Britain’s finest contemporary poets.

Liz Lochhead was born in Motherwell in 1947. While studying Drawing and Painting at the Glasgow School of Art she began to write seriously, gradually losing her way with her initial dream of becoming a painter. Her first book of poetry, Memo for Spring, was published in 1972 and sold 5,000 copies. The Scottish-Canadian Writers Exchange Fellowship,1978–9, marked her transition to full-time writer.

Since her first full-length play Blood and Ice appeared in 1984 she has written numerous original plays and many adaptations from Molière, Chekhov, Euripides and Sophocles. Her best known original plays include: Mary Queen of Scots Got Her Head Chopped Off, Perfect Days and the Saltire Society Scottish Book of the Year Award-winning Medea (Nick Hern, 2000). Her poetry collections include: Dreaming Frankenstein (Polygon, 1984), True Confessions and New Clichés (Polygon, 1985), Bagpipe Muzak (Penguin, 1991), The Colour of Black & White (Polygon, 2003) and A Choosing (Polygon, 2011). In 2005 Liz became Poet Laureate of Glasgow, and in 2011 she was appointed Scotland’s Makar, succeeding Edwin Morgan. Liz Lochhead was awarded the Queen’s Gold Medal for Poetry (2015). Liz is proud to be Honorary President of the Scottish Poetry Library.

‘Liz Lochhead has made a unique contribution to Scottish poetry. Since the early 1970s she has influenced an entire generation of other writers, bringing a new kind of poetry performance to the stage, as well as a different set of rhythms to the page. From the start, she spoke in her own feisty, female voice, mixing old Scots with new Scots – as aware of Burns as of Morgan – and she did this with a galvanizing spirit and vitality that helped to change the landscape of British poetry’ – Carol Ann Duffy 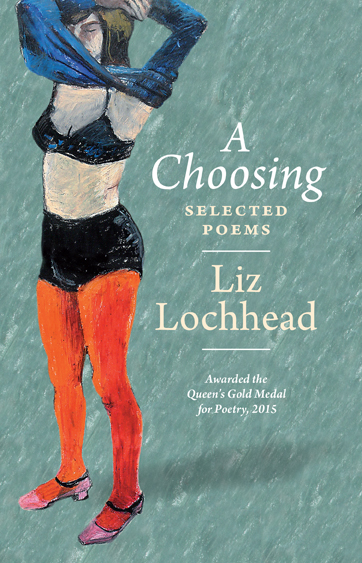