A Personal History of Northern Soul

28 in stock (can be backordered)

'Dacre’s War is an absorbing, dense read, packed with political twists. The Scottish Borders are superbly evoked – this is a land of constant fear and hardship, as well as great beauty. Highly recommended’ – Antonia Senior, The Times

'The combination of extremely detailed historical research, beautifully descriptive prose and strong characterisation woven into a tale of political intrigue in evocative and atmospheric settings makes this a book with which many readers will quickly become absorbed' – Dundee University Review of the Arts

Dacre’s War is a story of personal and political vengeance. Ten years after the battle of Flodden, Adam Crozier, head of his clan and of an increasingly powerful alliance of Borderers, learns for sure that it was Lord Thomas Dacre – now the most powerful man in the north of England – who ordered his father’s murder. He determines to take his revenge.

As a fighting man, Crozier would like nothing better than to bring Dacre down face to face but his wife Louise advises him that he must use more subtle methods. So he sets out to engineer Dacre’s downfall by turning the machinery of the English court against him. A vivid and fast-moving tale of political intrigue and heartache, Dacre’s War is a fascinating portrait of the historical Scottish and English borderlands, a place were there is never any chance of peace.

Rosemary Goring was born in Dunbar and studied social and economic history at the University of St Andrews. She was the literary editor of Scotland on Sunday, followed by a brief spell as editor of Life & Work, the Church of Scotland’s magazine, before returning to newspapers as literary editor of the Herald, and later also of the Sunday Herald. In 2007 she published Scotland: The Autobiography: 2000 Years of Scottish History By Those Who Saw it Happen, which has since been published in America and Russia. Rosemary’s first novel was After Flodden. 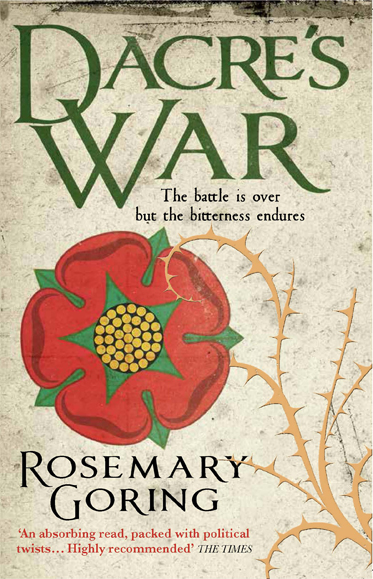