All at Sea in the Aegean

‘A tale of risking all to pursue a dream. …The story is told with disarming aplomb, packed with characters and incidents, and exhibiting much that is good in human nature, told in writing that constantly glides’ – Scotsman, Travel Books of the Year 2017

Leaving their Welsh hill farm behind, Nick, Ros and their children arrive on the little-known island of Ikaria in 1978, having impulsively boarded the first ferry leaving Athens. Escape to Ikaria tells the story of how they become involved with the islanders and their way of life. Nick tries his hand at anything to get by: night fishing out in the Aegean, unloading the potato boats from Samos, mixing cement for wayward house-builder Datsun Jim, and tending the gardens of the old monastery where a solitary nun, Sister Ulita, controls the village’s water supply.

Nick Perry spent his childhood in Dorset, out in the countryside daydreaming most of the time. He was educated at Parkstone Sea Training School before leaving for London where he worked for ATV Television. He travelled around Europe moving from job to job until he came into money. On impulse he bought a hill farm in North Wales, some experiences of which form the backdrop to Peaks and Troughs. He lives with his wife Arabella in the Wiltshire countryside where he spends his time writing, walking and listening to classical music. 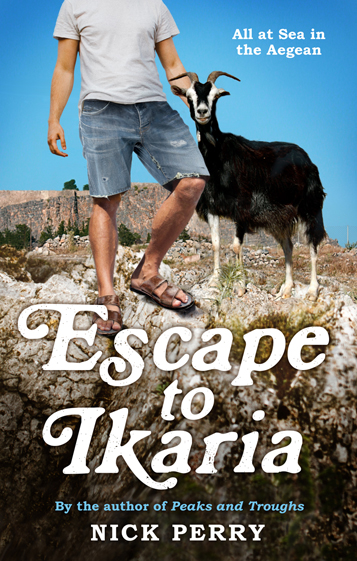