Found at Sea: The Expanded Log of the Arctic Whaler to overnight on Cava

Found at Sea: The Expanded Log of the Arctic Whaler to overnight on Cava

Andrew Greig embarked on this ‘micro-odyssey’ that took place from Stromness, Orkney to Ithe sland of Cava, Scapa Flow on a single voyage one evening in summer.

28 in stock (can be backordered)

‘One of the best things I’ve read so far this year is Found At Sea, a new book of poems by Andrew Greig’ – the Scotsman

‘At times both funny and moving . . . a wonderful piece of accessible verse’ – Yachting Monthly

‘Andrew Greig treats the epic, with its archetypal traditional trajectory of voyage and return, with touching lyric sensitivity’ – The Times Literary Supplement

‘A homage to George Mackay Brown, to friendship, to our seafaring heritage, and to Orkney; it combines lyrical descriptions of the light in the Northern Isles as well as an unforgettable account of trying to stand up to pee on a moving boat’ – Gavin Francis, Scotsman

Andrew Greig recounts in poetic sequence the tale of his open dinghy voyage from Stromness in Scapa Flow and an overnight stay on Cava (an island formerly inhabited for over twenty years by two unusual women). In sailing small boats in scary open waters Andrew Greg found a new activity and a new metaphor for life. Written in six weeks, Found at Sea is a ‘very wee epic’ about sailing, male friendship and a voyage.

Andrew Greig was born in Bannockburn in 1951 and raised in the Fife town of Anstruther. His first book was the poetry collection White Boats and his novel, In Another Light, won the Saltire Society prize in 2004. He has also had success with mountaineering titles, including Summit Fever and the mountain poetry collections Men on Ice and Surviving Passages. In 1996 The Return of John Macnab was shortlisted for the Romantic Novelists’ Association Award. Greig is a former Glasgow University Writing Fellow and SAC Scottish/Canadian Exchange Fellow. He studied philosophy at the University of Edinburgh and held a number of part-time jobs before turning to writing. He now lives in Edinburgh, and is married to author Lesley Glaister. 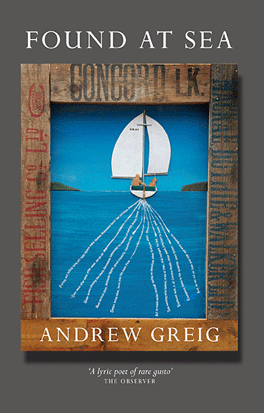