Paintings by the Richardson Family

Paintings of Hadrian’s wall by the Richardson family

‘The paintings are beautifully reproduced, and accompanied by succinct but informative text’ – Current Archeology

Brothers Henry, Charles and Thomas Richardson painted nearly 80 views of Hadrian’s Wall between 1838 and the 1880s. Most were created by Henry Burdon Richardson, who accompanied author John Collingwood Bruce on his tour of Hadrian’s Wall in 1848. Only 17 were reproduced as engravings in Bruce’s books; very few have ever been published as paintings. They form a valuable record of the Roman frontier as it was during an important stage in its history, before the advent of the modern world. New theories and interpretations were coming to light, as described in Bruce’s first book The Roman Wall, published in 1851. John Clayton, town clerk of Newcastle upon Tyne, had begun buying land along the Wall, aiming to preserve the remains, creating in effect an archaeological park. The production of the Richardson paintings, Bruce’s contribution to Wall studies and the achievement of John Clayton in conserving the Wall, are all explored, providing a fascinating background story.

Over 70 of the Richardsons’ paintings are published in the book, most with Bruce’s original description and a commentary by the author.

David Breeze OBE was formerly Chief Inspector of Ancient Monuments for Scotland and is the author of books on Hadrian’s Wall, the Antonine Wall, Roman frontiers and the Roman army. He is an Honorary Professor at the Universities of Durham, Edinburgh, Newcastle and Stirling, and has an honorary doctorate from the University of Glasgow. 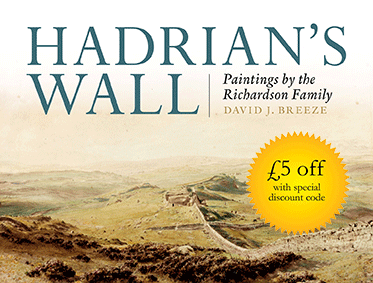