Island on the Edge

Island on the Edge

A fascinating and absorbing tale of life on an island.

33 in stock (can be backordered)

‘a lovely, gentle tale of a lady who had to wind down to adjust to her new life, which proved to be anything but dull! It will stir the adventurer in all of us!’ – Fleetwood Weekly News

‘This is a rather subtle book, all the more convincing for its occasional naiveties and its draughtswoman’s plainness of observation… The plainness of the writing is exemplary. There are a couple of heart-stopping sunsets, but mostly we get to know Anne through tiny glimpses and tone-changes’ – The National

Anne Cholawo was a typical 80s career girl working in a busy London advertising agency, when in 1989, holidaying in Skye, she noticed an advert for a property on the Isle of Soay – ‘Access by courtesy of fishing boat’. She had never heard of Soay before, let alone visited it, but something inexplicable drew her there. Within ten minutes of stepping off the said fishing boat, she had fallen under the spell of the island, and after a few months she moved there to live. She is still there.

When she arrived on the remote west coast island there were only 17 inhabitants, among them the legendary Hebridean sharker Tex Geddes and his family. Today, including Anne and her husband Robert, there are only three. This book describes her extraordinary transition from a hectic urban lifestyle to one of rural isolation and self-sufficiency, without mains electricity, medical services, shops or any of the other modern amenities we take for granted. Anne describes the history of Soay and its unique wildlife, and as well as telling her own personal story introduces along the way some of the off-beat and colourful characters associated with the island, notably Tex’s one-time associate, the celebrated writer and naturalist, Gavin Maxwell.

Anne Cholawo was born and brought up in Luton. She studied Art and Design at college and later became a graphic artist and studio manager at a number of advertising agencies in London, including Saatchi and Saatchi. She moved to Soay to live in 1990. While on the island she met the man who is now her husband, Robert Cholawo. 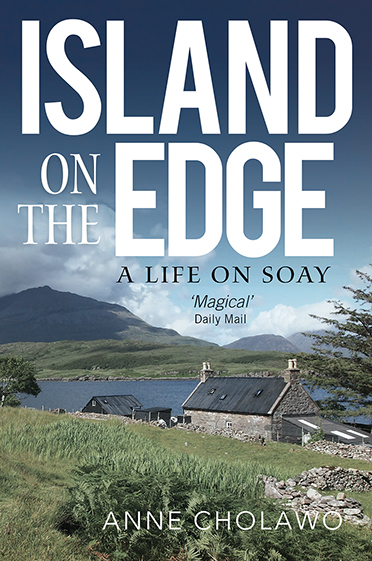