26 in stock (can be backordered)

‘A substantial, weighty tome, worth every penny of its price. Determination, earnestness, humour and originality characterise all this work. A substantial intellectual treat brought fully into the scholarly light of day for a new generation’ – Cambrian Medieval Celtic Studies

John Bannerman (1932–2008) saw the history of Scotland from a Gaelic perspective, and his outstanding scholarship made that perspective impossible to ignore. As a historian, his natural home was the era between the Romans and the twelfth century when the Scottish kingdom first began to take shape, but he also wrote extensively on the MacDonald Lordship of the Isles in the fourteenth and fifteenth centuries, while his work on the Beatons, the notable Gaelic medical kindred, reached into the early eighteenth century. Across this long millennium, Bannerman ranged and wrote with authority and insight on what he termed the ‘kin-based society’, with special emphasis upon its church and culture, and its relationship with Ireland.

This collection opens with Bannerman’s ground-breaking and hugely influential edition and discussion of Senchus fer nAlban (‘The History of the Men of Scotland’), which featured in his Studies in the History of Dalriada (1974), now long out of print. To this have been added all of his published essays, plus an essay-length study of the Lordship of the Isles which first featured as an appendix in Late Medieval Monumental Sculpture in the West Highlands (1977). The book will be of interest to anyone who wants to know more about the Gaelic dimension to Scotland’s past and present.

John Bannerman studied Celtic languages at the University of Glasgow and gained a PhD from the University of Cambridge. He joined the history department at Edinburgh University in 1967 and worked there for 30 years, while also running the family farm at Balmaha, Stirlingshire. He published a number of influential works on Gaelic Scotland, including Studies in the History of Dalriada and a major contribution to Late Medieval Monumental Sculpture in the West Highlands. He retired from teaching in 1997 and took up farming full-time at Balmaha. He died in 2008. 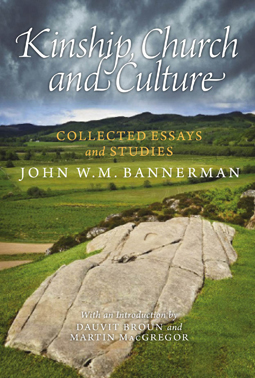