The story of Lee Brilleaux, frontman of Doctor Feelgood.

1 in stock (can be backordered)

‘Zoe Howe is one of our finest music biographers… In the case of Lee Brilleaux, she has undoubtedly done us a great service as this is a book that needed to be written about the iconic frontman of one of the most influential British bands of all time’ – Dave Jennings, Louder Than War

Lee Brilleaux, the uniquely charismatic star of proto-punk R&B reprobates Dr Feelgood, was one of rock’n’roll’s greatest frontmen. But he was also one of its greatest gentlemen – a class act with heart, fire, wanderlust and a wild streak. Exploding out of Canvey Island in the early 1970s – an age of glam rock, post-hippy folk and pop androgyny – the Feelgoods, with Lee Brilleaux and Wilko Johnson at the helm, charged into London, grabbed the pub rock scene by the throat and sparked a revolutionary new era, proving that you didn’t have to be middle class, wearing the ‘right clothes’ or living in the ‘right place’ to succeed.

Lee Brilleaux: Rock’n’Roll Gentleman, while a totally different work, is a companion of sorts to the hugely popular Wilko Johnson book: Looking Back at Me (also co-authored by Howe). Published with the blessing of Lee’s widow Shirley, this is an exhilarating, eye-opening collection of exclusive interviews, memories and unseen drawings and images – the first comprehensive appreciation of Lee Brilleaux and a book no Dr Feelgood fan would wish to be without.

Zoë Howe, described by Louder than Words as ‘one of the UK’s great biographers’, is a music author whose other books include the acclaimed Typical Girls? The Story of the Slits, ‘How’s Your Dad?’ Living in the Shadow of a Rock Star Parent, British Beat Explosion: Rock n’ Roll Island, and Dr Feelgood guitarist Wilko Johnson’s memoir Looking Back at Me. Her writing has also appeared in The Quietus, Company, Notion, BBC Music, Holy Moly, Classic Rock and NME. Zoë has also made music radio series for stations including the award-winning Resonance FM, and she can be heard talking about rock n’ roll from time to time on BBC 6 Music, Absolute Radio, Planet Rock, BBC London and elsewhere. 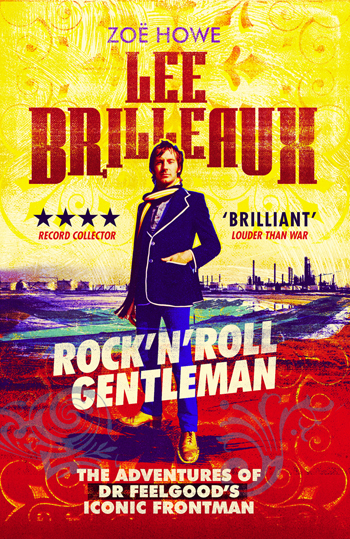