The Magicians of Scotland

The Magicians of Scotland

‘A lively collection of poems that will entertain, move and frequently amuse . . . this book confirms [Butlin] as one of our finest contemporary poets’ – Alexander McCall Smith on The Magicians of Edinburgh

‘The poetical genius of Butlin . . . Ron Butlin is the voice of Edinburgh’ – FringeReview.com

‘Butlin is the best, the most productive Scottish poet of his generation’ – Douglas Dunn

‘Often an apparently simple idea, simply expressed, can in fact be cleverly freighted with meaning’ – Scotland on Sunday

Ron has recorded a selection of poems from The Magicians of Scotland. To claim these free tracks email magicpolygon@birlinn.co.uk and we’ll send you a unique download code.

Following on from the runaway success of The Magicians of Edinburgh (now in its sixth reprint), renowned poet and novelist Ron Butlin conjures up Scotland’s past, present and future in this new collection. From Skara Brae and the Roman invasion to the independence referendum and beyond, the former Edinburgh Makar (Poet Laureate) explores what Scotland means to itself and to the outside world. With his customary wit and insight, he takes a good hard look at some of its magicians – from James Hutton to Professor Peter Higgs, from Robert Burns to Dame Elizabeth Blackadder and even Tony Blair. Underlying all these poems is a deep love for Scotland’s uniqueness, and its magic!
Ron Butlin is a poet, playwright, novelist, short story writer and opera librettist whose works have been broadcast in the UK and abroad and have been translated into many languages. His volumes of poetry include the award-winning Ragtime in Unfamiliar Bars (Secker & Warburg, 1985) and Histories of Desire (Bloodaxe, 1995). His New and Selected Poems was published by Barzan in 2005. His novels include the novels The Sound of My Voice (winner of the Prix Mille Pages 2004 and Prix Lucioles 2005, both for Best Foreign Novel), Night Visits and most recently Belonging. He was appointed Edinburgh Makar in May 2008.
The publishers acknowledge investment from Creative Scotland towards the publication of this book. 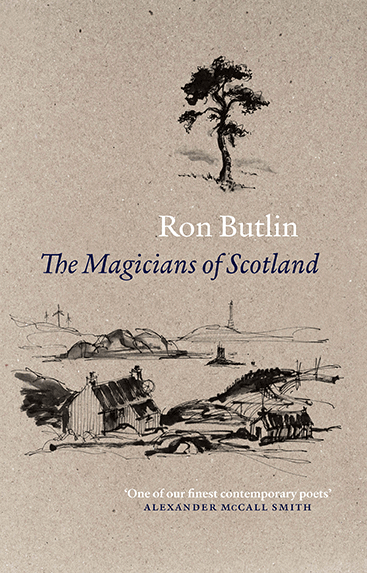