90 in stock (can be backordered)

‘By far the finest celebration of Burns for the 2009 anniversary’ – Stuart Kelly, Scotland on Sunday

Published as ‘a sly wink to the master’, this anthology of contemporary poetry is full of surprises. Twelve leading Scottish poets were asked to supply a selection of new work appropriate to Robert Burns’s title Poems, Chiefly in the Scottish Dialect. Here are the many responses from John Burnside, Robert Crawford, Douglas Dunn, Alasdair Gray, W N Herbert, Kathleen Jamie, Jackie Kay, David Kinloch, Tom Leonard, Liz Lochhead, Don Paterson and Robin Robertson. With titles from ‘Own Goal’ to ‘Maw Broon Goes for Colonic Irrigation’, the poems are in turn daft, uproarious and tenderly lyrical, rejoicing in the canny and uncanny possibilities of the Scots and English tongues.

Robert Crawford is Professor of Modern Scottish Literature at St Andrews University. His six collections of poetry in English include A Scottish Assembly (Chatto, 1990), The Tip of My Tongue (Cape, 2003) and Selected Poems (Cape, 2005); work in Scots includes Sharawaggi (Polygon, 1990). Four of his collections have been Poetry Book Society Recommendations and he has won two Scottish Arts Council Book Awards. With Simon Armitage he edited The Penguin Book of Poetry from Britain and Ireland since 1945 (1998) and with Mick Imlah The New Penguin Book of Scottish Verse (2000). His latest book The Bard, a biography of Robert Burns, will be published by Cape in January 2009. 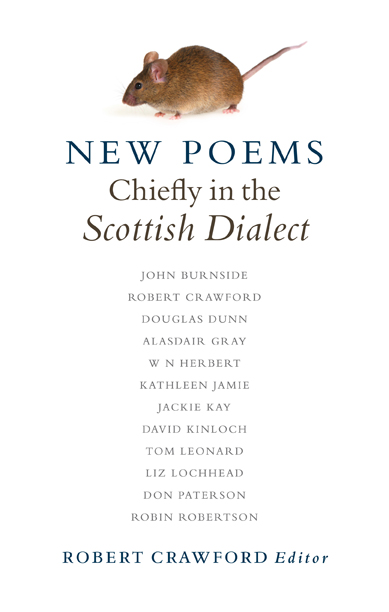