1 in stock (can be backordered)

Called the Gateway to the Highlands, the ancient town of Crieffs beautiful location ensured that it never had to industrialise for survival, relying instead on weaving, agriculture and the constant stream of tourists who have been arriving since the railway opened in the 1850s. This illustrated history of the town, containing fifty-four period photographs, tells the story from the thirteenth century through to the present day. The photographs include the proclamation of Edward VIII’s accession to the throne in 1936; a game on the giant draughts board in James Square; a delivery to Lipton’s grocer on High Street; a performance of the Crieff Comedy Company; trains coming and going at the railway station (which sadly closed in 1964). Several pictures also show life at the Hydro in all its Edwardian splendour and the events of the Crieff Highland Games. More poignantly, life at Monzie Camp in the years just before the First World War is also explored. 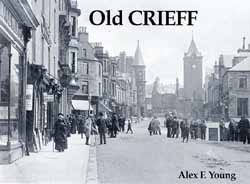