A mining area since gold was found in the 16th century, the village of Wanlockhead grew up around the lead mines which provided employment from the mid-seventeenth century right up until the early 1900s. It is to their credit that twentieth century villagers recognised the value of their mining heritage and with the help of mining engineer Geoff Downs Rose established the Wanlockhead Museum Trust once mining ceased.
Today the village is a picturesque gem in the centre of an area of great natural beauty. A visitor centre is housed in the old Smiddy, pictured in the book still in use in 1900. This collection of photographs displays a vibrant community at work and at play; members of lodge Wanlock No. 1187 in full regalia are snapped on the steps of the Fraser Institute in 1919; the substantial village brass band group in front of the village school with the instruments presented to them by the Duke of Buccleuch in 1871 and the Wanolckhead Amateur Dramatic Society’s 1950s production of Kye Among the Corn is dramatically captured.
Many cottages are shown here with their original thatched roofs which were later replaced with slate. Particularly evocative is the photo of ‘The Corner’ neighbourhood on Manse road in the 1890s with groups of neatly dressed children and older residents at their doors, openly curious at the antics of the photographer. 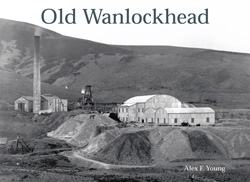