44 in stock (can be backordered)

‘Stuart David was a founding member of Belle & Sebastian before going on to form Looper, and he’s turned out to have quite the knack for writing prose too … it’s good fast-paced fun’ – Sunday Herald

‘A pacy thriller with an above average laugh count’ – Scotsman

‘Peacock and Bev are fantastic characters. Very excited to see them back’ – Graham Linehan

‘If Stuart David ever gives up the day job, pop music’s loss would be literature’s gain’ – The Times

Peacock Johnson’s got an idea that’s guaranteed to make him rich, and a friend who’s willing to invest in the idea.

But Peacock’s having some difficulty laying the groundwork for his less-than-legal enterprise. Local homicide detective Duncan McFadgen is convinced that Peacock is responsible for a recent murder, and is constantly on Peacock’s tail, badgering him with questions and trying to break his alibi for the night of the murder.

Peacock’s path to riches seems to be vanishing into the ether and then things begin to seriously unravel . . .

Stuart David is a musician, songwriter and novelist. He grew up in Alexandria, on the west coast of Scotland – a town memorably described as looking like ‘a town that’s helping the police with their inquiries’. The character of Peacock Johnson is based on some of the people Stuart grew up amongst there. Stuart co-founded the band Belle and Sebastian (1996–2000) and went on to form Looper in 1998. His memoir, In the All-Night Café: A Memoir of Belle and Sebastian’s Formative Year, was published by Abacus/Little, Brown in 2015 to much critical acclaim. 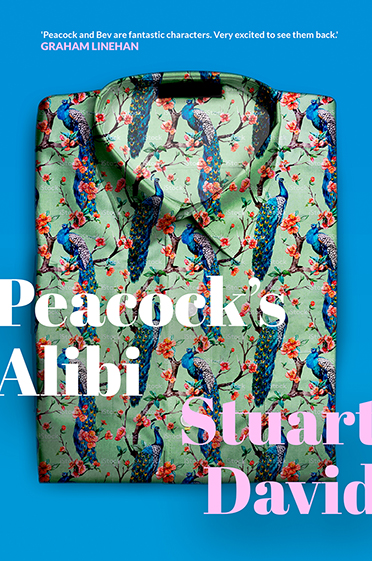