‘Christopher Rush has written a profound meditation not just on our present condition but on how we all live inside ‘the web’, how we weave fact, the way we make and unmake fictions, and how we choose to live and die by them’ – Brian Morton, Scottish Review of Books

‘Read it if you yearn for something startlingly original and uncompromising.’ – Antonia Senior, Historical Book of the Month, The Times

Odysseus returns to Ithaca after nearly twenty years, half of it spent as a soldier and the other half as a soldier of fortune. During his absence his wife Penelope remains faithful, despite Odysseus being missing and presumed dead, but when her husband suddenly reappears he confronts those who have been trying to seduce his wife and kills them all.

This is a novel about war and peace, about how returning soldiers can find peace more horrible than war, and home more hellish than the battlefield.

Christopher Rush was born in St Monans and taught literature for thirty years in Edinburgh. His books include A Twelvemonth and a Day and the highly acclaimed To Travel Hopefully. A Twelvemonth and a Day served as inspiration for the film Venus Peter, released in 1989. The story was also reworked by Rush in a simplified version in 1992 as a children’s picture book, Venus Peter Saves the Whale, illustrated by Mairi Hedderwick, which won the Friends of the Earth 1993 Earthworm Award for the book published that year that would most help children to enjoy and care for the Earth. 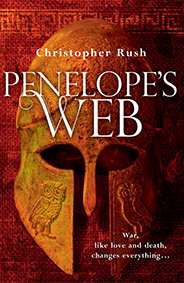