Originally published in 2000 by Polygon to mark the 250th anniversary of Fergusson’s birth, this new edition contains all Fergusson’s finest poems in both Scots and English, and features a new introductory essay, revised orthography, a substantial section of notes and a glossary.

– Robert Burns on Robert Fergusson. Written in 1787 after Burns had paid for a memorial stone to be erected over Fergusson’s grave in the Canongate Kirkyard

Born in Edinburgh in 1750, Robert Fergusson has long been acknowledged as a crucial influence on Robert Burns, not least by Burns himself. But Fergusson was also a remarkable poet in his own right. For the few years in which he wrote, before dying in tragic circumstances at the age of 24, his work delighted readers with its vigour and craft. Although he wrote much verse in English – in the then fashionable Augustan style – it is his Scots verse with its great warmth, humanity, satire and outrageous comedy that is his enduring legacy. His work covers a wide range of human emotions and experience, and his subject matter ranges from drunken encounters with notorious City Guard to quieter reflections on pastoral themes. The poems are as fresh and appealing now as they were during the Age of Enlightenment in which they lived.

Robert Fergusson was born in Cap and Feather Close, a vennel off Edinburgh’s Royal Mile on 5 September 1750. The third of three surviving children, Robert attended Edinburgh’s Royal High School, the High School of Dundee and the University of St Andrews. He anonymously published the first of a trio of pastorals in Ruddiman’s Weekly magazine, entitled ‘Morning’, ‘Noon’ and ‘Night’. Fergusson subsequently enjoyed two years’ patronage from the Ruddimans, and submitted the periodical’s first Scots poem, ‘The Daft Days’, printed on 2nd January 1772. From that moment, vernacular Scots had a poetic voice in the magazine’s pages. Fergusson’s Poems on Various Subjects appeared in 1773. Fergusson may have been afflicted by depression, and following a head injury he was admitted to Edinburgh’s Bedlam madhouse. He died there on October 17th, 1774, aged just twenty-four. Fergusson was buried in an unmarked grave in Edinburgh’s Canongate Kirkyard. In 1787, Robert Burns erected a monument at his grave, commemorating him.

James Robertson (editor) is one of Scotland’s most significant writers, whose novels include Joseph Black (winner of the Saltire Scottish Book of the Year and the Scottish Arts Council Book of the Year 2003/2004), The Testament of Gideon Mack (longlisted for the Man Booker prize in 2006), And the Land Lay Still, and The Professor of Truth (2013). He is general editor of Black and White Publishing’s Itchy Coo imprint, which produces books in Scots for young readers. 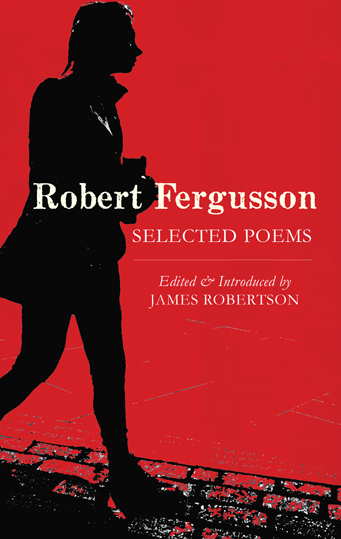