The Sands of Shark Island

The Sands of Shark Island

The second in a new series of adventure books from the creator of the No. 1 Ladies’ Detective Agency, featuring the School Ship Tobermory.

‘There must be something about taking to the high seas, and writing for children, that has brought Alexander McCall Smith back to his best. The book bounces along charmingly’ – Press and Journal, Book of the Week

‘A lively adventure with an unusual setting’ – Julia Eccleshare, lovereading4kids.co.uk

‘Beautifully written … This is a book we would strongly recommend to those looking for a story to read to their children or grandchildren, or for a book for slightly older children to read for themselves’ – Undiscovered Scotland

‘Exciting without being scary, this had me wishing I’d spent my schooldays on board a ship setting sail for the Caribbean!’ – 4.5 STARS, The Book Bag

Join Ben and Fee MacTavish and their friends as they set off for the Caribbean. Their routine of seamanship and snorkelling, kitesurfing and diving is soon interrupted when Captain Macbeth comes into possession of an old nautical chart. When the map is stolen and a new Tobermory recruit jumps ship, Ben, Fee and their friends decide to investigate. But danger lies all around as they follow their quarry to the mysterious Shark Island . . .

Alexander McCall Smith is the author of more than 80 books, including the No. 1 Ladies’ Detective Agency series, and 44 Scotland Street. He is one of the world’s most prolific and popular authors, and his books have been translated into 46 languages.

Goodreads reviews for The Sands of Shark Island 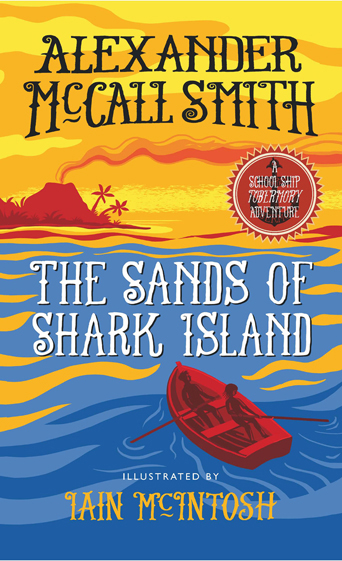