Sixty Degrees North: Around the World in Search of Home

Sixty Degrees North: Around the World in Search of Home

In Sixty Degrees North, the author travels along the 60th parallel, which passes through Shetland, where he was raised, and through Finland, Sweden. Norway, Greenland, Canada, Russia and Alaska, observing each land, and reflecting on his own life and recent loss.

7 in stock (can be backordered)

‘it’s a joy to read, its prose as clear as the light on the Greenland ice-cap. In the past year, I’ve read three or four books combining travelogue and memoir . . . this was the best’ – Telegraph

‘Malachy is a fine, sensitive writer with an eye for detail and a talent for descriptive prose’ – Gavin Bell, The Herald

‘Tallack does travelogue well, acutely balancing fact and fancy, and he has a nicely febrile line in his own vulnerability’ – Will Self, Guardian

‘a memoir remarkable for its intimacy, wisdom, and radiant prose . . . Throughout, Tallack renders descriptions of his emotional landscape as delicately as his painterly descriptions of the physical world . . . An enthralling meditation on place’ – Kirkus Reviews

The sixtieth parallel marks a kind of borderland. It wraps itself around the lower reaches of Finland, Sweden and Norway; it crosses the tip of Greenland and of South-central Alaska; it cuts the great spaces of Russia and Canada in half. The parallel also passes through Shetland, at the very top of the British Isles. In Sixty Degrees North, Malachy Tallack explores the places that share this latitude, beginning and ending in Shetland, where he has spent most of his life. The book focuses on the landscapes and natural environments of the parallel, and the way that people have interacted with those landscapes. It explores themes of wildness and community, of isolation and engagement, of exile and memory.

In addition, Sixty Degrees North is also a deeply personal book, which begins with the author’s loss of his father and his troubled relationship with Shetland. Informed by the journeys described, it moves towards a kind of resolution: an acceptance of loss, and ultimately a love of the place Tallack calls ‘home’.

Malachy Tallack has written for the New Statesman, the Guardian, the Scottish Review of Books, Caught By the River and many other publications, online and in print. He won a New Writers Award from the Scottish Book Trust in 2014, and the Robert Louis Stevenson Fellowship in 2015. He is from Shetland, and currently lives in Glasgow. 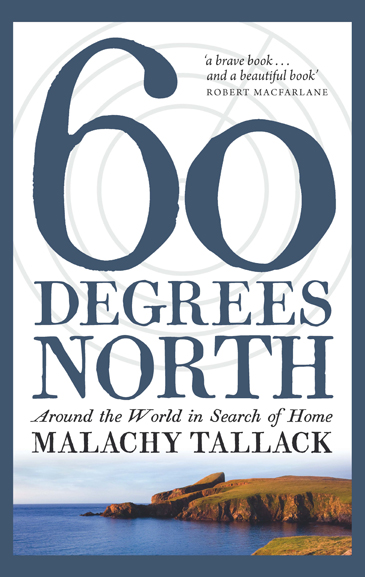