Steve & FranDan Take on the World

Steve & FranDan Take on the World

'The book is an easy, cheerful tale with enough peril and comedy to keep readers gripped. The three heroes could be found in any contemporary classroom, and the resolution of their problems is pretty credible. Well worth a read' – The Bookbag.co.uk

'From the novel's first page, the verve of his prose draws the reader energetically along. The pace is brisk, the style is wry and snappy, and the characters are a delight' – The Courier and Advertiser

'Ron Butlin is such a versitile author and marvellous poet. He's definitely got the right pitch with this book and I look forward to more' – Nudge Books

‘A traditional adventure-mystery with plenty of thrills. This great romp of a tale feels like stumbling on some thrilling piece of one’s past – a touch of the Hardy Boys, a hint of Tom Sawyer – yet finding that it’s updated, and works even now … A whitewater ride of a book’ – Vicky Allan, The Herald

'Action-packed adventure in which three friends bite off a whole lot more than most kids can chew when they take flight from a bully. Sharp, snappy style [makes for] a pacey page-turner [which] will surely appeal to 10+ year-olds with a thirst for high octane escapades' – Joanne Owens, LoveReading4Kids

Steve has had enough – enough of cyber-bullies, enough of adults messing up the world. Sharp-witted Fran and her brother worry-wart Dan feel exactly the same. And so, along with his dog Nessie, Steve and the FranDan twins leave town in the dead of night to start on the biggest adventure of their lives . . .

But if things were bad before, they soon get worse. Much, much worse. Some seriously bad men show up. Why have Steve and Dan been overpowered and led away as prisoners? Why are they kept tied up in the barn of a disused farm?

Having managed to escape, and with no way to call for help, Fran knows it’s up to her to mount a one-woman rescue.

Ron Butlin is a poet, playwright, novelist, short story writer and opera librettist whose works have been broadcast in the UK and abroad and have been translated into many languages. He is the author of bestselling poetry collections The Magicians of Edinburgh and The Magicians of Scotland, both published by Polygon, and the children’s book Here Come the Trolls (BC Books). His novels include The Sound of My Voice (winner of the Prix Mille Pages 2004 and Prix Lucioles 2005, both for Best Foreign Novel), Night Visits and most recently Belonging. He was Edinburgh Makar from 2008 to 2014.

Goodreads reviews for Steve & FranDan Take on the World 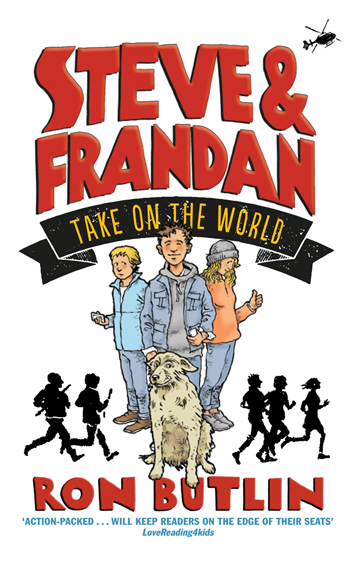