Tales and Traditions of the Lews

Tales and Traditions of the Lews

Tales and Traditions of the Lews is a marvellous pot pourri of local history, myth and legend from prehistoric times to the present day; it brings alive the island of Lewis in a way few other histories can.

75 in stock (can be backordered)

After his retirement from a career in medicine, Donald Macdonald turned his acute and wide-ranging mind to the study of the history and traditions of his native Lewis. Despite suffering from severe osteoarthritis, he was extremely active in the social and cultural life of the island, and contributed numerous articles to the Stornoway Gazette. However, much of his collection of tales, legends and history remained in private circulation until after his death in 1961, when his wife Emily arranged for the publication of this volume. With over sixty essays on people, places and tradition, it reveals the full range of the author’s erudition, and is informed by his love and deep knowledge of his native island. To read through or simply to dip into this collection is a fascinating experience for anyone who loves Scotland and her islands.

Donald Macdonald (1891 – 1961) was born in Stornoway, and educated at the Nicolson Institute there. He studied at the universities of Aberdeen, Glasgow and Edinburgh, graduating in medicine and going on to practice for many years in London. He married in 1923 the niece of Viscount Leverhulme, the then proprietor of Lewis. After retiring to his native island, Donald Macdonald devoted himself to the study of Gaelic language and culture, and particularly to the history and traditions of Lewis. He was active in various charitable causes, promoted artistic and cultural events, published regularly on topics of local interest and paved the way for the establishment of the Lewis and Harris Folk Museum. 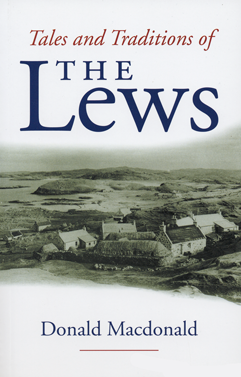