‘Of all the publications marking Burns’s 250th anniversary, the most luxurious is Birlinn’s sumptuous Tam o’Shanter’ – The Herald

Tam o’ Shanter is widely regarded as Robert Burns’ masterpiece. This magnificent edition of the poem features the work of Alexander Goudie, one of Scotland’s greatest 20th century artists, who was inspired by the poem to produce some of his most powerful and imaginative paintings, which capture all the menace and comedy of Burn’s poem.

‘Beautiful’ – Scotland on Sunday
To Scots the world over, Tam o’Shanter – funny, scurrilous, gloriously inventive – has achieved iconic status. Full of marvellous images it waited over 200 years for the partner who could realise the vision in the words. That partner was Sandy Goudie. His cycle of Burns paintings, worked on for many years, captures all the facets of this marvellous poem and are full of energy and life.
Originally planned to be bought as a cycle by the National Gallery, the bulk of the paintings now reside in Rozelle House in Ayrshire. However Sandy continued to work on Tam until the end of his life and for the first time this book matches together Burns peerless poem with the full range of Sandy’s paintings and drawings. Introduced and edited by Ted Cowan and Alan Riach of Glasgow University, this is not simply a beautiful book but the definitive edition of Burns’ masterpiece.
A limited edition of this book, costing £100 is also available. Please click here for more details.
Alexander Goudie (1933 – 2004) is widely acclaimed as having been one of Scotland’s finest figurative painters. He studied at the Glasgow School of Art and taught there for many years before dedicating himself to his own studio work. As a portraitist his sitters included Her Majesty Queen Elizabeth II, Lord, Billy Connolly and a host of other figures drawn from the worlds of politics, commerce and entertainment.
Robert Burns (25 January 1759-21 July 1796) is, quite simply, Scotland’s Bard. A poet and lyricist, he began life as a farm labourer but shot to fame following the publication of Poems, Chiefly in the Scottish Dialect. Lionised by polite society, Burns’ fame – and life – unfortunately did not last and he died at the early age of 37. In that short time, though, he took the Scottish literary world by storm, secured a place for himself in history and legend and left a legacy that continues of influence to this day. 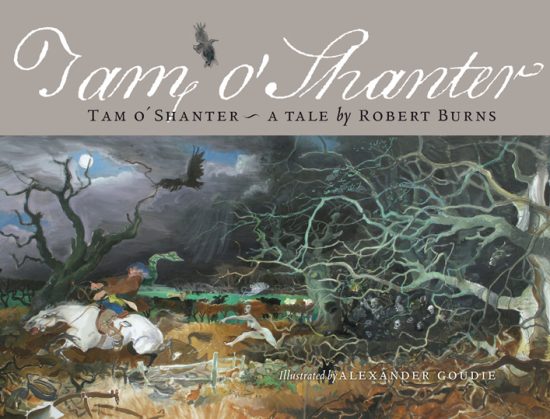