The Question of Scotland

The Question of Scotland

‘The Question of Scotland is lighter on its feet [than Devolution, 1977] and it reinforces the author’s scepticism about federalism and his support for strong, regionalized government. There is an audacity to his unionism that is invigorating coming from a Scottish Labour figure’ – TLS

In September 2014, with the Scottish independence referendum, the United Kingdom came close to being broken apart after three centuries as one of the most successful political unions in history. Yet despite a conclusive No vote, the SNP took almost every seat in Scotland at the 2015 general election. In this book Tam Dalyell offers a personal reflection on why the UK is on the brink of the most serious constitutional crisis in its history. But this is not just a history of why we have ended up where we are. Dalyell also offers sage advice and suggests ways forward which will inform debate as the UK moves into a new political era.

Tam Dalyell was born in Edinburgh in 1932. He joined the Labour Party in 1956 after the Suez Crisis and served as an MP from 1962 to 2005, first for West Lothian and then for Linlithgow. He retired as Father of the House and Scotland’s longest serving politician in 2005. 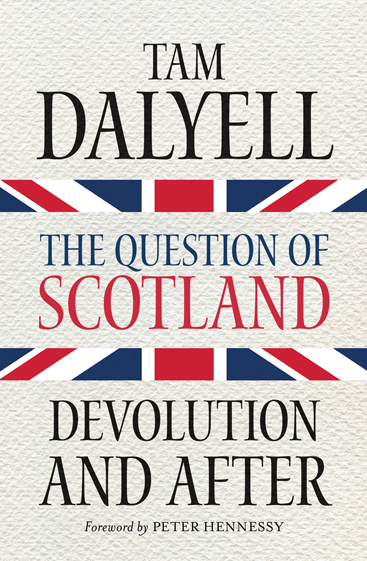