A Time of Tyrants

Scotland and the Second World War

A Time of Tyrants

‘We have waited a long time for a book such as Trevor’s Royle’s A Time of Tyrants, and I can think of no-one better qualified to tell Scotland’s wartime story’ – The Scotsman

‘If you want a work which covers the complete tale of Scotland in the Second World War, Time of Tyrants is as good as it gets’ – Scottish Legion News

‘Royle is a distinguished military historian and he has an outstanding grasp of strategy, and the ebb and flow of combat on a grand scale, yet he never forgets that wars are essentially about ordinary people living, fighting, surviving and often dying in very stressful times’ – Herald

Scotland also became a social melting pot with the arrival of Polish and eastern European refugees, whose presence added to the communal mix and assisted post-war reconstruction. In addition to the important military aspects – the exploits of the army’s renowned 15th Scottish and 51st Highland Divisions in Europe and North Africa and the role played by the RAF and the Royal Navy from Scottish bases – Scotland was also hugely important as an industrial power house and the nation’s larder.

The war also had a huge impact on politics, with national centralization achieved through the creation of the Scottish Office and the Scottish Grand Committee. With the emergence of the post-war Labour government and the welfare state, nationalism went into decline and the arrival of socialist hegemony, especially in the west, paved the way for the command politics which dominated Scotland for the rest of the century. Based on previously unseen archives in the Scottish Record Office, A Time of Tyrants is the first history of the unique role played by Scotland and the Scots in the global war to defeat Nazi Germany and Imperial Japan.

Trevor Royle is a broadcaster and author specialising in the history of war and empire. He is Associate Editor of the Sunday Herald and a fellow of the Royal Society of Edinburgh. Trevor’s books include The Flowers of the Forest: Scotland and the First World War and A Time of Tyrants: Scotland and the Second World War. 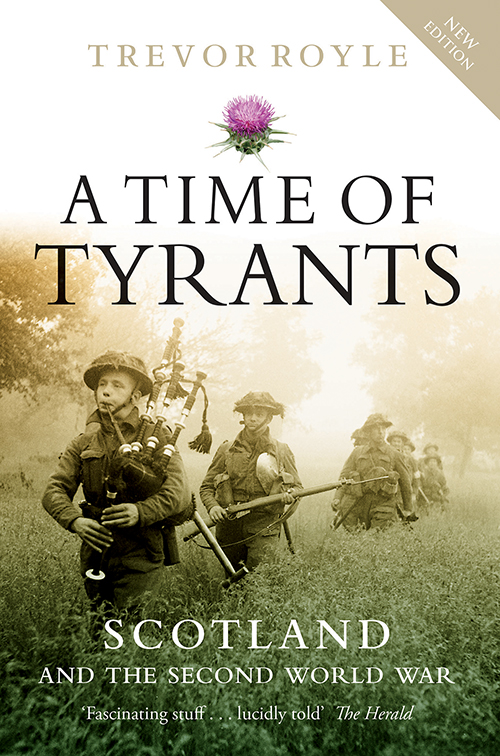