A Time to Keep

A Time to Keep

31 in stock (can be backordered)

‘George Mackay Brown finds more diversity of subject and mood in these islands than most writers would see in a city street. He evokes nature constantly, but naturally, with ease and no pretension. His images are stark, carefully placed, and exact . . . A precise, poetic and dazzling writer’ – The Guardian

‘George Mackay Brown really does possess the magician’s touch: there are few writers alive today with the courage to be so simple and direct, or with the talent – the sheer, unforced talent – to lighten up the most humdrum detail of an ordinary life and transform it into something unforgettable’ – The Observer

George Mackay Brown’s second volume of short stories revisits the Orkney of his first volume, A Calendar of Love, and the ups and downs of the crofters and fishermen there. A sensitive girl resorts to alcohol, a whaler is sidetracked by a gypsy wedding and a traditional fiddler gives in to the accordion. These magical stories, drawn from ancient lore and modern life, strip life down to the essentials.

George Mackay Brown is one the major Scottish literary figures of the 20th century. A prolific poet and novelist, he took much of his inspiration from the myths and landscape of Orkney, and also from his deep Catholic faith. His collection of short stories A Time to Keep (1971) won the Katherine Mansfield Mentor short story prize, while Beside the Ocean of Time was shortlisted for the 1994 Booker prize; he was made a Fellow of the Royal Society of Literature in 1977. He died in 1996.

Goodreads reviews for A Time to Keep 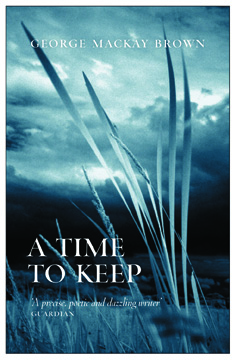