An inspiring narrative of one man’s exploration within the fringes of the arctic circle. A truly unique perspective.

‘True North is a wonder-voyage – an immrama – out into the landscape of the northern regions, but also into the mindscape of those many travellers who have been drawn irresistibly northwards over the millennia. Fluent, subtle, tough and often beautiful, True North stands alongside Peter Davidson’s The Idea of North and Joanna Kavenna’s The Ice Museum as a significant recent addition to the Arctic canon,” – Robert Macfarlane

‘A deep empathy with the land and its history runs like a golden thread through every chapter of True North.‘ – Sara Wheeler, The Spectator

Gavin Francis is an accomplished teller of traveller’s tales. His nuanced, often witty, observations of the people and places he encounters mean True North really gets under the skin of Europe’s magical north.’ – Sunday Herald

The stark, vast beauty of the remote Arctic Europe landscape has been the focus of human exploration for thousands of years. In this striking blend of travel writing, history and mythology, Gavin Francis offers a unique portrait of the northern fringes of Europe. His journey begins in the Shetland Isles, takes him to the Faroes, Iceland, Greenland, Svalbard and on to Lapland.

Following in the footsteps of the region’s early pioneers, Francis observes how the region has adapted to the 21st century, giving an observed insight into the lives of people he encounters along the way.

As with all the best travel writing, True North is an engaging, compassionate tale of self-discovery, whilst blending historical and contemporary narratives in the tradition of Bruce Chatwin and Robert Macfarlane.

Gavin Francis was born in Fife and currently lives in Edinburgh. His interest in history and travel has seen him pass through Europe, India, Africa and South America as well as spending a year on a remote base in Antarctica. His latest travel plan is to travel by motorbike from Edinburgh to New Zealand with his wife. 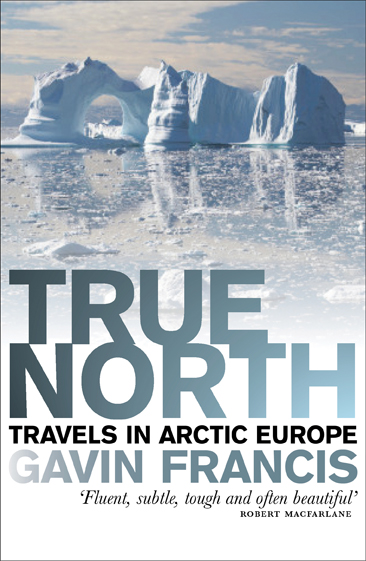