The White Rose of Gask

The Life and Songs of Carolina Oliphant, Lady Nairne

The White Rose of Gask

The first modern account of the mysterious woman poet who wrote some of Scotland’s most famous traditional songs, like ‘Charlie Is My Darling’ and ‘A Hundred Pipers’

Carolina Oliphant, Lady Nairne, a contemporary of Robert Burns, wrote over 80 songs which enjoyed great popularity during her lifetime and still do so up to the present day. They are some of Scotland’s most famous traditional songs – including ‘Charlie Is My Darling’, ‘A Hundred Pipers’, ‘Will Ye No’ Come Back Again’ and ‘The Laird of Cockpen’. Despite their popularity, she shunned publicity and never acknowledged her authorship in her lifetime, even concealing it from her husband for a time. After her death, the publication in 1846 of her collected songs and poems as Lays from Strathearn revealed her secret.

Partly because of her lifelong reticence, details of her biography and her personality have remained little-known though her songs are famous, and this important Scottish literary figure has been neglected. Freeland Barber, a descendent of Lady Nairne, now presents a long-overdue biography and reassessment of her life and work, much of it based on research into family papers to which he has recently had access.

From Glen Fincastle in Perthshire, Freeland Barbour has been a central figure in Scottish traditional music for many years, as musician, radio and record producer, and composer. A former BBC music producer, he has also taught at the Royal Scottish Conservatoire in Glasgow and was manager and owner of one of the UK’s leading recording studios, Castlesound in East Lothian. A two-volume collection of his compositions and the story of his life in music, The Music and the Land, was published by Birlinn in 2015. In 2019 he published a new edition of The Lays of Strathearn, the songs of Carolina Oliphant, Lady Nairne. 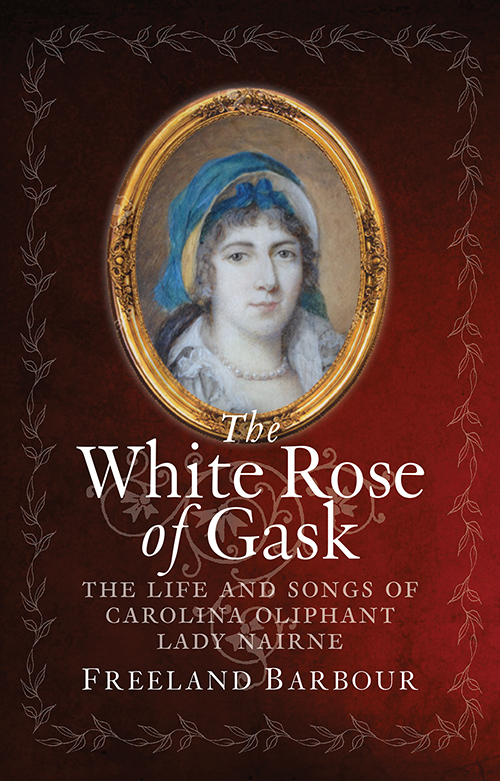