Seumas MacInnes, one of Scotland’s premier restaurateurs and owner of the iconic Café Gandolfi in Glasgow loves Stornoway Black Pudding. This is his tibute to the other ‘Great chieftain o’ the puddin’ race’.

Seumas MacInnes, one of Scotland’s premier restaurateurs and owner of the iconic Café Gandolfi in Glasgow, is not afraid to take issue with the national bard over the sobriquet ‘Great chieftain o’ the puddin race’. Without slighting the qualities of haggis, or indeed white pudding, he wholeheartedly maintains that the title rightfully belongs to black pudding – and, very specifically, Stornoway black pudding. Raised in Glasgow with a Hebridean heritage, he rates black pudding as a versatile and uniquely flavoursome ingredient which can be served in myriad ways that will come as a revelation to those who still mistakenly associate the humble marag dubh solely with fried breakfasts. The 100 recipes in The Stornoway Black Pudding Bible include everything from the Café Gandolfi’s black pudding and mushrooms with pancakes, to black pudding pakoras, black pudding tarts and black pudding, chorizo and bean stew. Black – or blood – pudding has a venerable past that stretches back to allusions in Homeric literature and a present that ensures its enduring popularity in the cuisines of, among others, Spain, France and Portugal. The Stornoway Black Pudding Bible is a celebration of the quality and versatility of black pudding, and above all is an encouragement to strike out in novel and fresh ways of cooking and enjoying this remarkable and underrated ingredient.

Seumas MacInnes is one of Scotland’s foremost restaurateurs. After studying hotel management he joined the restaurant in 1983 and became its owner in 1995. He has recently published the Café Gandolfi Cookbook to celebrate the restaurant’s 30th birthday, and also presented a series of online cookery demonstrations for a selection of his favourite recipes on STV’s Scotland on TV. Seumas is married to Donalda and has three children – Sileas, Alasdair and Donald. He lives in Glasgow. 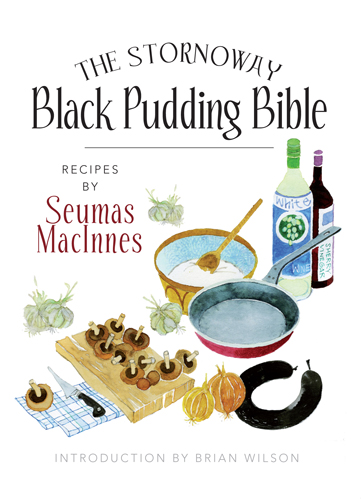