Buke of the Howlat, The - Paperback

Buke of the Howlat, The - Paperback

'Features beautiful illustrations by Kate Leiper, a humourous ugly-duckling-type tale which is suitable for reading out loud to wee ones or good for readers aged over 8' – Press and Journal

'we are presented with a lovely story that is thought-provoking and enjoyable, and ideal for reading to young children, or being read by those able to do so for themselves … set within large illustrations by Kate Leiper that are simply delightful' – Undiscovered Scotland

SCOTS EDITION of The Book of the Howlat

Originally written in the 1440s by Richard Holland, a Scottish cleric who was chaplain to Archibald Douglas, Earl of Moray, The Buke of the Howlat is one of the great poetic gems of fifteenth-century Scots.

Believing himself to be ugly, a young owl (howlat) decides to speak to the most handsome bird of all, the peacock, and ask his help so that Nature can change him. But the peacock isn’t sure this should be done – after all, Nature doesn’t usually make mistakes – and summons a council of birds to make a decision. A huge feast takes place, and Nature herself appears and orders all the birds present to give the owl one of their feathers. But the result is not what they expect. The howlat’s initial joy turns to unbearable arrogance at his new-found beauty, and drastic action must be taken . . .

James Robertson is one of Scotland’s most significant writers, whose novels include Joseph Black (winner of the Saltire Scottish Book of the Year and the Scottish Arts Council Book of the Year 2003/2004), The Testament of Gideon Mack (longlisted for the Man Booker prize in 2006), And the Land Lay Still, and The Professor of Truth (2013). He is general editor of Black and White Publishing’s Itchy Coo imprint, which produces books in Scots for young readers. 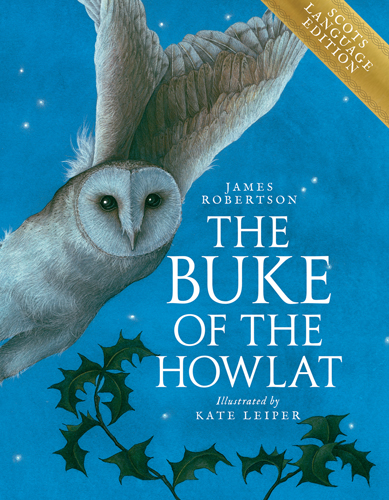