Written mostly during the 1930s, the sequence consists of forty-eight love poems addressing a universal ‘eimhir’, or woman.

MacLean’s finest work is to be found in the sequence of themed poems, Dàin Do Eimhir agus Dain Eile/ Poems to Eimhir and Other Poems (1943). Written mostly during the 1930s, the sequence consists of forty-eight love poems addressing a universal ‘eimhir’, or woman. At the heart of the poems is a sense of lamentation for lost love and opportunity yet they are also sharply political.

Sorley MacLean was born on the island of Rasaay in 1911. He was brought up within a family and community immersed in Gaelic language and culture, particularly song. He studied English at Edinburgh University from 1929, taking a first class honours degree. Despite this influence, he eventually adopted Gaelic as the medium most appropriate for his poetry. He translated much of his own work into English, opening it up to a wider public. During the Spanish Civil War MacLean was torn between family commitments and his desire to fight on behalf of the International Brigades. He eventually resigned himself to remaining on Skye. He fought in North Africa during World War Two, before taking up a career in teaching, holding posts on Mull, in Edinburgh and finally as Head Teacher at Plockton High School. Amongst other awards and honours, he received the Queen’s Gold Medal for Poetry in 1990. He died in 1996 at the age of 85. 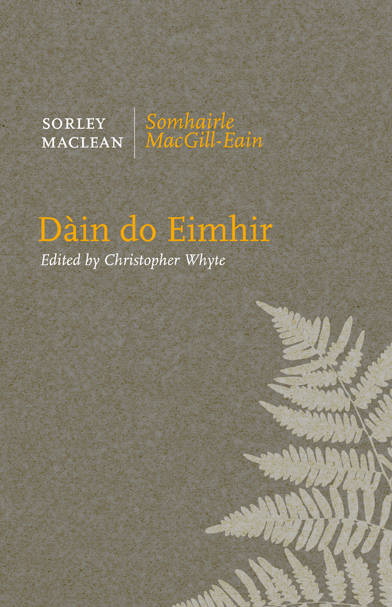