A new collection from one of Scotland’s most loved writers

‘The most striking aspect of Fugitive Colours, as with all her work, is its directness. She could be talking to the reader over a tearoom table, so conversational and confiding is its tone. Her eagerness to tell a story fills the pages’ – Rosemary Goring, Herald

‘An eclectic mix of the poignant, the quirky and the playful. …Delighting in language and rhythm, and free with her allusions, she always makes her meaning clear’ – Mark Fisher, Scotsman

‘Liz Lochhead has made a unique contribution to Scottish poetry. Since the early 1970s she has influenced an entire generation of other writers, bringing a new kind of poetry performance to the stage, as well as a different set of rhythms to the page. From the start, she spoke in her own feisty, female voice, mixing old Scots with new Scots – as aware of Burns as of Morgan – and she did this with a galvanizing spirit and vitality that helped to change the landscape of British poetry’ – Carol Ann Duffy

‘I adore the sincerity of these poems, and their humorously plainspoke way of dealing with loss and love’ – The Skinny

‘In sharing heartfelt personal tales and playing with her clever wit, Lochhead has given us a brilliantly balanced compilation of original poems’ – Dundee Courier

Liz Lochhead has been awarded the prestigious Queen’s Gold Medal for Poetry.

Liz Lochhead’s new collection encompasses a life enriched with people, places and relationships; it is with humour and empathy that these relationships are captured, remembered and honoured in moments of joy and poignancy. There is sadness, truth, hope and optimism throughout the five sections in this collection, each is varied in scope but are woven together as part of a life. This stunning new collection marks the end of Liz Lochhead’s term as Makar (Poet Laureate, 2011–2016) and features never before published work alongside poems written during her time as Makar.

Throughout her career Liz Lochhead has been described as a poet, playwright, translator and broadcaster; she maintains that ‘when somebody asks me what I do I usually say writer. The most precious thing to me is to be a poet. As a playwright, I’d like to be known as a poet in the theatre.’

Liz Lochhead was born in Motherwell in 1947. While studying Drawing and Painting at the Glasgow School of Art she began to write seriously, gradually losing her way with her initial dream of becoming a painter. Her first book of poetry, Memo for Spring, was published in 1972 and sold 5,000 copies. The Scottish-Canadian Writers Exchange Fellowship,1978–9, marked her transition to full-time writer.

Since her first full-length play Blood and Ice appeared in 1984 she has written numerous original plays and many adaptations from Molière, Chekhov, Euripides and Sophocles. Her best known original plays include: Mary Queen of Scots Got Her Head Chopped Off, Perfect Days and the Saltire Society Scottish Book of the Year Award-winning Medea (Nick Hern, 2000). Her poetry collections include: Dreaming Frankenstein (Polygon, 1984), True Confessions and New Clichés (Polygon, 1985), Bagpipe Muzak (Penguin, 1991), The Colour of Black & White (Polygon, 2003) and A Choosing (Polygon, 2011). In 2005 Liz became Poet Laureate of Glasgow, and in 2011 she was appointed Scotland’s Makar, succeeding Edwin Morgan. Liz Lochhead was awarded the Queen’s Gold Medal for Poetry (2015). Liz is proud to be Honorary President of the Scottish Poetry Library. 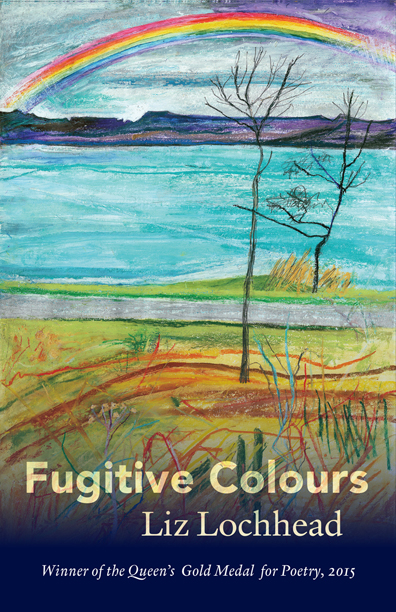