The Sinking of the German Fleet at Scapa Flow in 1919

At Scapa Flow on 21 June 1919, there occurred an event unique in naval history. The German High Seas Fleet, one of the most formidable ever built was deliberately sent to the bottom of the sea at the British Grand Fleet’s principal anchorage at Orkney by its own officers and men.

The Grand Scuttle became a folk legend in both Germany and Britain. However, few people are aware that Rear Admiral Ludwig von Reuter became the only man in history to sink his own navy because of a misleading report in a British newspaper; that the Royal Navy guessed his intention but could do nothing to thwart it; that the sinking produced the last casualties and the last prisoners of the war; and that fragments of the Kaiser’s fleet are probably on the moon.

This is the remarkable story of the scuttling of the German fleet in Scapa Flow. It contains previously unused German archive material, eyewitness accounts and the recollections of survivors, as well as many contemporary photos which capture the awesome spectacle of the finest ships of the time being deliberately sunk by their own crew.

Dan van der Vat, born in Holland and educated in England, became a full-time author after 25 years in journalism. He has published seven books on maritime history, including The Ship that Changed the World and The Riddle of the Titanic (with Robin Gardiner), as well as a biography of Albert Speer. 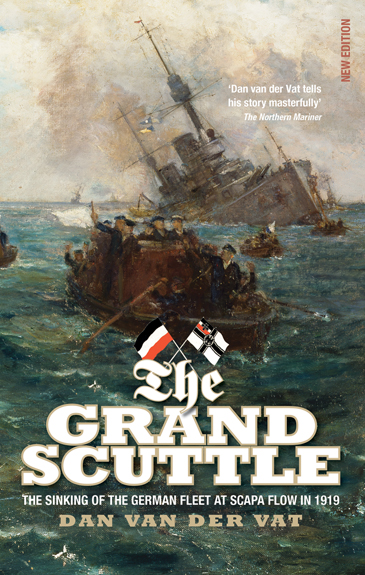