The Kings of Alba

The Kings of Alba

‘A valuable addition to the field,’ – BBC History Magazine

A hugely rewarding voyage of discovery for anyone interested in the formation of the kingdom of the Scots.

43 in stock (can be backordered)

‘A valuable addition to the field,’ – BBC History Magazine

The events of 1000–1130 were crucial to the successful emergence of the medieval kingdom of the Scots. Yet this is one of the least researched periods of Scottish history. We probably now know more about the Picts than the post-1000 events that underpinned the spectacular expansion of the small kingdom which came to dominate north Britain by the 1130s. This expansion included the defeat and absorption of other significant cultural and political groups to the north and south of the core kingdom, and was accompanied by the introduction of reformed monasticism. But perhaps the most momentous process amongst all these political and cultural changes was the move towards the domination of the kingship by just one segment of the royal kindred, the sons of King Máel Coluim mac Donnchada’s second marriage to Queen Margaret. The story of how these sons managed to achieve political supremacy through machination, murder and mutilation runs like an unsavoury thread throughout this book. The book also investigates the building blocks from which the kingdom was constructed and the various processes which eventually allowed the kings of the different peoples of north Britain to describe themselves as Rex scottorum.

Alasdair Ross graduated from the University of Aberdeen with an MA in History and Celtic in 1999 and a PhD in 2003.He is currently a lecturer in history at the University of Stirling. He was co-editor of The Exercise of Power in Medieval Scotland, c.1200–1500 (2003) and is Editor of the magazine History Scotland. 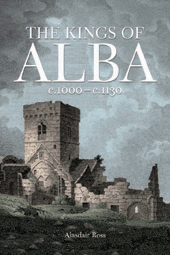