The first history of Manchester and its conurbation based on historic maps and unpublished original plans.

‘In the field of urban historical cartography you surely cannot get a better book than this. I certainly cannot think of a publication on the cartography of London which matches not only the breadth and depth of this volume, but also the quality of its production, from the weight of its paper, to its binding and the sharpness of its reproductions’ – AH Schulenburg, Society of Cartographers Bulletin

‘An endlessly fascinating anthology of the most important (and often unorthodox) maps of Manchester throughout its history. A truly beautiful book’ – Waterstones Deansgate

Manchester is one the world’s most iconic cities. Not only was it the first industrial city, it can claim to be the first post-industrial city. This book uses historic maps and unpublished and original plans to chart the dramatic growth and transformation of Manchester as it grew rich on its cotton trade from the late 18th century, experienced periods of boom and bust through the Victorian period, and began its post-industrial transformation in the 20th century.

The Peterloo Massacre, the Bridgewater Canal, the railway revolution, Trafford Park industrial estate, the Ship Canal, Belle Vue theme park, Wythenshawe garden city, the 1996 IRA bomb, Coronation Street, iconic football stadiums, and MediaCity are just some of the events and places that have put Manchester on the world’s perceptual map and are explored through a wealth of published and unpublished maps and plans in this sumptuously illustrated cartographic history.

Brian Robson is Emeritus Professor at Manchester University. In 1983 he founded the Centre for Urban Policy Studies and has published six books and well over 100 articles. Since retiring he has pursued a long-held interest in historic urban cartography.

Martin Dodge is Senior Lecturer in Geography at Manchester University. Much of his current research focuses on Manchester and he has co-curated several high-profile public exhibitions about the city. 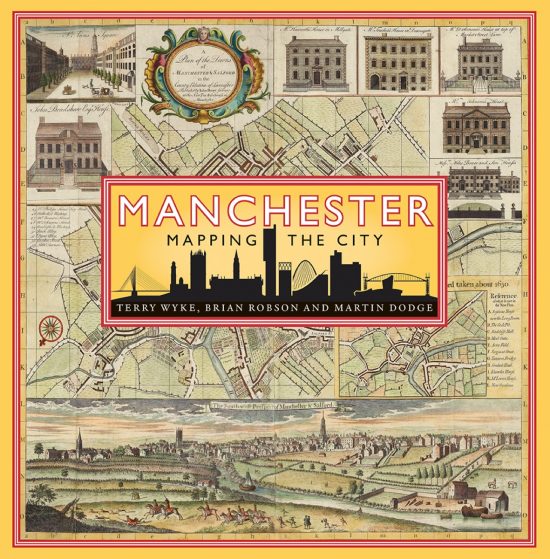