by R D S Jack and P A T Rozendaal

An anthology of early Scottish literature. It is suitable as a teaching text for school and university students.

32 in stock (can be backordered)

This large-scale anthology of early Scottish Literature, now revised, has been designed as a teaching text for use by school and university students. Longer works are either presented complete—e.g. James I, Kingis Quair; as long extracts with explanatory linking passages—e.g. Urquhart, The Jewel; or by sections which sum up the main themes and concerns of the text—e.g. Barbour’s Bruce Book I. There are full critical and linguistic introductions; brief biographical and bibliographical introductions for each author or sub-section; the texts have all been re-edited; every difficult word is glossed, and full explanatory notes appear at the foot of each page.

A substantial Appendix presents texts in Latin, Scots, English and Gaelic from the seventeenth century, demonstrating the vitality and interaction of these voices within the Scottish tradition.

A noteworthy feature of the book is Professor Jack’s Critical Introduction, ‘Where Stands Scottish Literature Now?’ This challenges many widely-held assumptions about Scottish literature. In particular it seeks to explore the reasons behind the strange neglect of the writers of the seventeenth century. Basing its argument on the texts of the Anthology as a whole, it seeks to re-define the accepted canon and suggests an alternative way of approaching Scottish literary history. 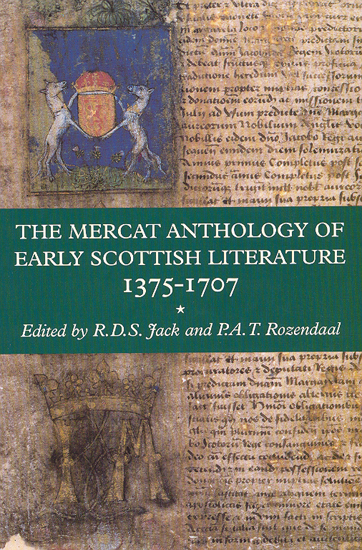