‘Pedersen’s poems exist in a febrile realm of heightened emotion; they come pouring across the page like a rowdy crowd at a Hogmanay street party [with] an infectious enthusiasm for the downright amazingness of existence’ – Scotsman

‘Michael Pedersen’s poems get under my skin. As well as defining and codifying my own experiences, they also challenge them. And I always feel more upbeat and hopeful after having read them. You really can’t ask much more from a poet’ – Irvine Welsh

‘A cosmic, playful, weird and extravagant striptease of words for the brain, genitals and tender hearts . . . I LOVE the fancy clothes one’ – Charlotte Church

From Grez-sur-Loing and festive nights to sizzling summers stretched out in the Meadows and Portobello, Michael Pedersen’s unique brand of poetry captures a debauchery and a disputation of characters, narrated with an intense honesty and a love of language that is playful, powerful and penetrative; he vividly illuminates scenes with an energy that is both witty and humorous but also deeply intelligent. Oyster is iced, spiced, baked and beaming for your pleasure.

Michael Pedersen has published two successful chapbooks and an acclaimed debut collection Play with Me (Polygon). He was named a ‘Canongate Future 40’; was awarded the John Mather Trust Rising Star of Literature Award 2014 (appointed by the Scottish Poetry Library); received a Cove Park residency and the 2015 Robert Louis Stevenson Fellowship. Most recently he has been working on a feature film commission with Director Robert McKillop and keeping the Neu! Reekie! dream alive.

Scott Hutchison was a Scottish singer, songwriter, guitarist, and artist. He was best known as the founding member – and primary songwriter – of the indie rock band Frightened Rabbit, with whom he recorded five studio albums. The band conquered the UK Top Ten Album Charts, enjoyed international success, and enthralled audiences the world over with poetic lyrics, powerful melodies, and formidable live shows. Hutchison studied illustration at the Glasgow School of Art and worked as a freelance illustrator. He died in May 2018. 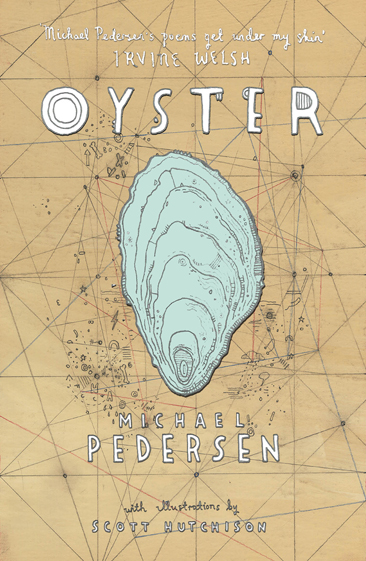