Robert the Bruce: King of Scots

Robert the Bruce: King of Scots

Jill Calder’s illustrations offer a fresh and vital perspective of this popular historical tale of The Bruce as told by James Robertson, one of Scotland’s most significant modern writers.

‘A clever distillation of the key facts. Robertson cuts with ease through the complexity of the political manoeuvring that led to Bannockburn, boiling the story to its bones […] what makes this book so special is its extraordinary illustrations. Jill Calder’s images are stunning, capturing the murkiness of 14th-century Scotland with a boldness, vigour and moodiness that manage to be both intensely modern and evocatively medieval’ – Saturday Herald

‘A gloriously illustrated picture-book version, with expertly concise text by one of Scotland’s finest novelists’ – The Herald

‘A lively pictorial account of the drama. Bolstered by Jill Calder’s vibrant illustrations, it is as much for older children as adults, but avoids over-simplifying the battle and the complex factors that led to it’ – The Lady

‘This unique book will enthral readers of all ages’ – Scottish Field

In this exciting and visually stunning book, the most talented Scottish novelist of his generation teams up with Jill Calder, whose bold and colourful illustrations are a perfect complement to one of the most dramatic tales in Scottish history. In addition to the big set pieces from the Bruce story – not least of course the Battle of Bannockburn – and the other famous elements– such as the murder of the Red Comyn and Bruce and the spider – book is full of accurate historical detail and imaginative touches which offer a fresh and vital perspective on one of the great heroes of Scottish history.

James Robertson is one of Scotland’s most significant modern writers, whose novels include Joseph Knight (winner of the Saltire Scottish Book of the Year and the Scottish Arts Council Book of the Year 2003/2004), The Testament of Gideon Mack (longlisted for the Man Booker prize in 2006), And the Land Lay Still, and his most recent work, The Professor of Truth (2013).

Jill Calder has been working as an illustrator since 1993. She is also a calligrapher, digital artist and lecturer with a love of drawing, ideas, colour, ink, typography, book-binding and sketchbooks. Her clients include Visa, The New Yorker, Adobe, Penguin, Siemens, Kellogs and a snail farm in the West Highlands of Scotland. 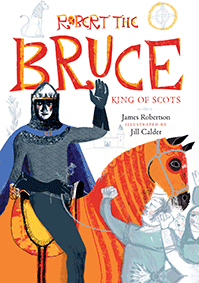