Inside RBS, The Bank That Broke Britain

New paperback edition brings the story right up to date with updated coverage of the Ross McEwan era and continuing scandals, such as: the savage branch closure plans; the ratcheting up of job transfers to India; the toxic RMBS settlements in the US; the £1bn cost of settling the shareholders’ action over RBS’s 2008 rights issue; the GRG scandal; and the Williams & Glyn fiasco.

For a few brief months in 2007 and 2009, the Royal Bank of Scotland was the largest bank in the world. Then the Edinburgh-based giant – having rapidly grown its footprint to 55 countries and stretched its assets to £2.4 trillion under its hubristic and delinquent former boss Fred Goodwin – crashed to earth.

In Shredded, Ian Fraser explores the series of cataclysmic misjudgments, the toxic internal culture and the ‘light touch’ regulatory regime that gave rise to RBS/NatWest’s near-collapse. He also considers why it became the most expensive bank in the world to bail out and why a culture of impunity was allowed to develop in the banking sector.

This new edition brings the story up to date, chronicling the string of scandals that have come to light since taxpayers rescued RBS and concluding with an evaluation of the attempts of the bank’s post-crisis chief executives, Stephen Hester and Ross McEwan, to dismantle Goodwin’s disastrous legacy and restore the damaged institutions to health.

Ian Fraser is an award-winning journalist, commentator and broadcaster who writes about business, finance, politics and economics. His work has been published by among others The Sunday Times, The Economist, Financial Times, BBC News, Thomson Reuters, Dow Jones, Daily Mail, Mail on Sunday, Independent on Sunday, the Herald, Sunday Herald, The Scotsman, Accountancy, CA Magazine and Citywire.

‘Shredded is a magnificent book. I regard it as one of the best investigative books of the past decade’ – Eamonn O’Neill, BBC Radio Scotland

‘A gripping account … RBS was a rogue business, operating in what had become a rogue industry, with the connivance of government. Read it and weep’ – Martin Wolf, Financial Times

‘A model of the journalist’s craft, Zola-esque in its broad and unsparing study of corporate hubris and nemesis and haunting in the questions it leaves in its wake’ – Bill Jamieson, Scotsman

‘Impeccably researched and hard to put down at any point … The author pulls no punches’ – Philip Augar, Financial Times

‘Combines Greek tragedy with real-life events that have affected us all. It’s hard to put down’ – Devraj Ray, Mortgage Strategy

‘I don’t think I have ever read such a perfect morality tale for our times’ – Iona Bain, FT Adviser

‘The definitive text. I’m thinking of Barbarians at the Gate about Kohlberg Kravis Roberts and RJR Nabisco. An instant classic’ – Max Keiser, The Keiser Report

‘You should absolutely read Ian Fraser’s Shredded. It is probably the definitive work on the British and Irish banks in the Great Bubble and the ensuing Great Financial Crisis’ – Alexander Harrowell, The Yorkshire Ranter

‘The definitive account of the RBS fiasco. It’s an engaging tale of how self-serving bank executives systematically broke the rules, lent with astonishing recklessness, abused customers and got suckered by Wall Street – before dumping their mess on the taxpayers’ – Yves Smith, author of Naked Capitalism

‘Nearly six years after the bailout, Shredded reminds us how much of banking reform is still a work in progress’ – Nick Dunbar, nickdunbar.net

‘Not just the definitive book on the collapse of RBS but one of the best five books on the great financial collapse which changed the history of the 21st century. Ian pulls no punches in his conclusions’ – Russell Napier, CLSA

‘This book should be posted through the letterbox of every taxpayer in Britain’ – David Mellor, former Chief Secretary to the Treasury 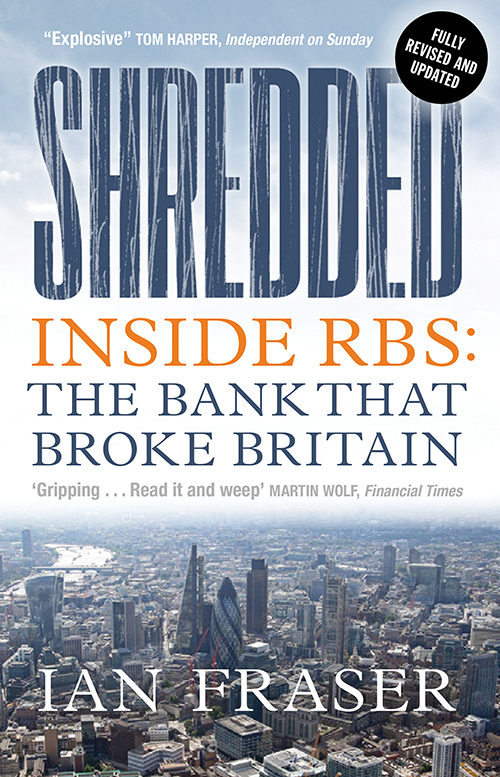